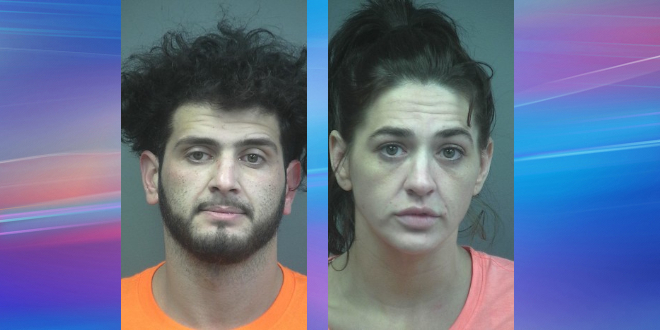 (Bluffton, IN)-  On February 19th, 2020, detectives from the Indiana State Police Fort Wayne Post arrested a man and woman in connection with a fraudulent home repair scam that had been taking place in the Bluffton (Wells County) area. Austin Boswell (24) of Hanceville, Alabama, and Candace Prairie (29) of Peru, Indiana were both taken into custody and booked into the Wells County Jail last Wednesday evening, charged with felony offenses related to the alleged home improvement scam.

The investigation began when a concerned family member of the victim contacted the Bluffton Police Department after discovering large sums of money transfers out of the victim’s bank account. The investigation found that from January 8th through February 20th the suspects purported to have done work on the victim’s foundation, driveway, roof, and lighting rods that were attached to the house. The suspects also expanded their scheme by utilizing perpetrators other than just contractors, whom presented themselves as State agents and inspectors. Documents were presented to the victim falsely claiming back taxes were due on his property, and then attempted to collect payment for the alleged back taxes.

Although these two alleged suspects were identified, taken into custody, and charged during this investigation, it is believed that there were several other accomplices involved in the fraudulent activities, and a strong possibility that other homeowners in the region may have been victimized under similar circumstances.

If you think that you may have been the victim of a recent home repair fraud in or around the Wells County area, or if you as a care giver or family member of a person that may have been victimized, you are urged to contact detectives at the Indiana State Police Fort Wayne Post at (260)432-8661. Your information may prove valuable in preventing others from falling prey to these types of scam artists.

It should be noted that all criminal defendants are to be presumed innocent until proven guilty in a court of law.

I play on the radio from 7 am -1 pm weekdays on 98.9 FM WYRZ and WYRZ.org. Follow me on twitter @WYRZBrianScott or e-mail me at brian@wyrz.org.
Previous Plainfield Town Council Approves Higher Education Center
Next IndyGo Sees More than 8% Increase in System Ridership in January