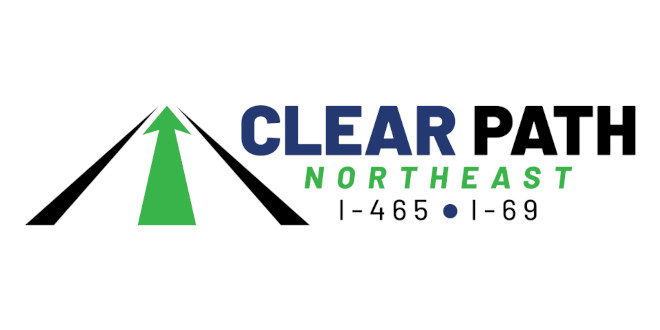 INDIANAPOLIS (Aug. 1, 2022) – Clear Path 465 contractors are preparing to rebuild and add lanes to I-465 between I-69/Binford Boulevard and the White River on the city’s northeast side. The work will be completed in phases and require several traffic shifts, closures and changes to ramp access on I-465 beginning in early August.

I-465 eastbound shift and on-ramp closures

One weekend of traffic pattern changes will affect the I-465 eastbound lanes. It is expected to begin Friday evening, Aug. 5 and be completed before the Monday morning commute. Crews will restrict I-465 eastbound to one lane to restripe the pavement and shift traffic toward the outside shoulder.

The weekend traffic pattern changes include short-term and long-term ramp closures. The Keystone Avenue on-ramps to eastbound I-465 will close during the weekend restriping work and reopen before the Monday morning commute.

The long-term closure of the Allisonville Road on-ramp to eastbound I-465 is expected to begin during the weekend and the ramp will remain closed through 2024. The long-term closure is needed to allow room for construction, allow crews space to safely work, help crews work efficiently and to help keep traffic flowing during the Clear Path 465 project.

Click here to view a flyer with maps and illustrations of the short and long-term traffic changes.

I-465 westbound shift and express lane

Crews will restrict I-465 westbound to one lane to restripe the pavement and shift traffic closer to the eastbound lanes. The weekend work will also restrict three ramps to one lane:

When completed, the left lane of I-465 westbound will shift across the center median for a temporary express lane from I-69/Binford Boulevard to Keystone Avenue. No large trucks will be allowed and the first exit ramp access out of the express lane will be at U.S. 31/Meridian Street.

The I-465 traffic pattern and temporary express lane are expected to remain in place for the rest of 2022. Three lanes will remain open in each direction for I-465 traffic.

A temporary ramp will open for southbound I-69 traffic exiting onto westbound I-465, allowing the existing ramp to be closed and rebuilt. The ramp switch is expected to occur over one night on or after Friday, Aug. 12 and affect the southbound I-69 lanes.

Southbound I-69 traffic will be restricted to one lane with stoppages of up to 20 minutes as overhead signs and pavement markings are changed. The 96th Street and 86th Street on-ramps to southbound I-69 will also close overnight.

When the southbound I-69 lanes and ramps reopen for the morning commute, a new traffic pattern will be in effect. Traffic will exit to the right for southbound I-465 and from the center lanes for westbound I-465.

Drivers are urged to observe the signs and pavement markings and stay alert for other vehicles as they adjust to the new traffic patterns. Handsfree use of mobile mapping apps with real-time traffic is encouraged for local drivers seeking alternate routes.

Police are enforcing the reduced speed limits of 45 mph and other traffic violations in the work zone.

I play on the radio from 7 am -1 pm weekdays on 98.9 FM WYRZ and WYRZ.org. Follow me on twitter @WYRZBrianScott or e-mail me at brian@wyrz.org.
Previous Paving and patchwork operation to start on or after August 5 on State Road 39 in Hendricks County
Next Official Memorial Fund for Fallen Officer Noah Shahnavaz