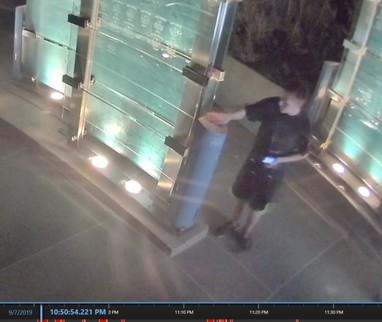 (Indianapolis, IN)-The Capitol Police Section of the Indiana State Police is seeking the public’s assistance in identifying at least one, and as many as three suspects in an alleged vandalism, which is said to have occurred on Saturday, September 7, 2019 at the Congressional Medal of Honor Memorial, on the downtown canal across from the Indiana State Museum (650 W. Washington Street).

According to Officer Charles Meneely, on Monday, September 9, 2019, maintenance personnel at the Congressional Medal of Honor Memorial noticed damage to a descriptive marker/pillar.  Follow up investigation, which included video surveillance footage, showed at approximately 10:51 p.m. on September 7th, an unknown young male captured on video surveillance, allegedly damaging the same descriptive marker/pillar.  The video then showed a total of three males gathered around the damaged marker/pillar a few seconds later.  The estimated damage was said to have been approximately $300.00.

Anyone with any information as to the identity of any of the young men pictured below is asked to contact Capitol Police Officer Meneely at (317) 234-2131.  Anonymous calls will be accepted.

I play on the radio from 7 am -1 pm weekdays on 98.9 FM WYRZ and WYRZ.org. Follow me on twitter @WYRZBrianScott or e-mail me at brian@wyrz.org.
Previous Maintain Your Septic System During National Septic-Smart Week
Next Rolling Slow-down scheduled for I-70 Traffic through Hendricks County early Sunday Morning