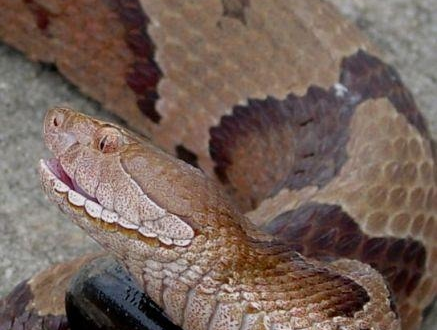 Brown Co—Indiana Conservation Officers were called to Brown County State Park Saturday evening when a camper reported being bitten by a snake.  Nan Zhang, 35 of Carmel, and his family were camping in Taylor Ridge Campground in Brown County State Park this weekend.  The family was headed to the shower house this evening when Mr. Zhang was bitten on the foot by a snake.  Mr. Zhang was wearing flip flops and the snake bit him on the toe.  Other campers in the area killed the snake and it was identified by Indiana Conservation Officer Brent Bohbrink as a Copperhead Snake.  Mr. Zhang was transported to Columbus Regional Hospital in stable condition. 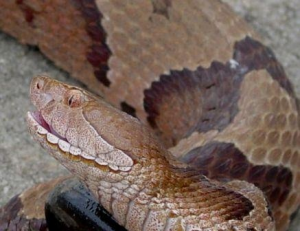 While Copperheads and Timber Rattlesnakes are present in Brown County State Park, bites to humans are rare.  these snakes are present throughout southern Indiana and as long as visitors use the same precautions they would use anywhere else, most snake/human encounters can be avoided.  These precautions include staying on trails while hiking in the woods, be sure to look on the back side of fallen logs before stepping over them, wearing closed toe, sturdy footwear while hiking and using a good flashlight while walking in the woods after dark.  If you encounter a snake in the woods, simply back away and leave the area.  These snakes are not aggressive by nature and rarely, if ever, attack a person.

I play on the radio from 7 am -1 pm weekdays on 98.9 FM WYRZ and WYRZ.org. Follow me on twitter @WYRZBrianScott or e-mail me at brian@wyrz.org.
Previous Officer is injured by gunfire after responding to suicidal person on Indianapolis’ southeast side Saturday
Next Police Revive Man from Suspected Opioid Overdose in Fulton County