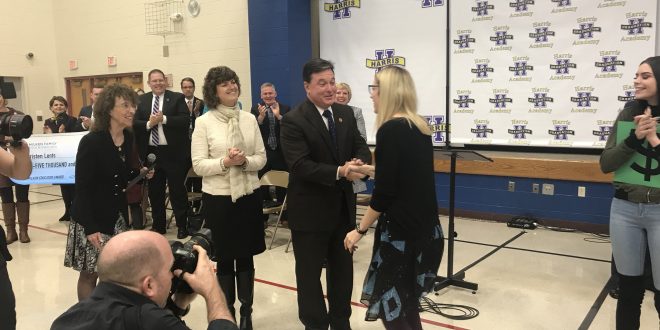 Brownsburg Teacher Receives $25,000 Milken Educator Award, 1 of 44 in Country, Only 1 in State

“Our students and our state are successful because of the hard work and dedication of teachers like Kristen Lents,” said Dr. Jennifer McCormick, Indiana Superintendent of Public Instruction. “Through high quality instruction, Kristin has spent her professional life academically preparing students for their future, and it is my privilege and honor to present Kristen with the Milken Educator Award.”

“Kristen Lents is a gifted teacher whose greatest gift may be reaching those who are really struggling,” said Dr. Jane Foley, senior vice president of the Milken Educator Awards and a 1994 recipient from Indiana. “Her drive to make math relevant and rewarding to all students is the kind of dedication and service we look for in our Milken Educators. Lents’ inclusive and eclectic approach is part of what makes her a world-class teacher.” 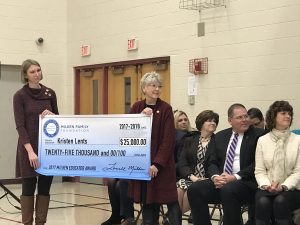 Lents teaches 9-12 grade mathematics at Harris Academy, a non-traditional high school serving students in Brownsburg and nearby Avon. Students who attend Harris Academy include teen parents, students with health issues, those who have to work to support themselves, and reluctant learners with credit deficits. Through her instruction and educational model, Lents has helped her students find academic success. Last year alone, 98 percent of her students earned their math credits, while 57 percent who retook the Algebra I end-of-course assessment passed – exceeding the school’s target and showing a 39-point mean improvement. Lents has also taken the lead in the school’s advisory program, designing a curriculum for goal-setting and career planning with her students. Lents is also involved in professional development both at Harris Academy and Brownsburg High School. Lents earned a bachelor’s degree in mathematics education from Oakland City University.

“Brownsburg is very proud of the education our students receive at Harris Academy,” said Dr. Jim Snapp, Brownsburg Superintendent. “Kristen is an exceptional leader on a staff that believes in building relationships to foster academic and personal success for students.”

I play on the radio from 7 am -1 pm weekdays on 98.9 FM WYRZ and WYRZ.org. Follow me on twitter @WYRZBrianScott or e-mail me at brian@wyrz.org.
Previous Indianapolis Airport Authority Board Reelects Officers
Next Brownsburg Town Council appoints new members to boards and commissions