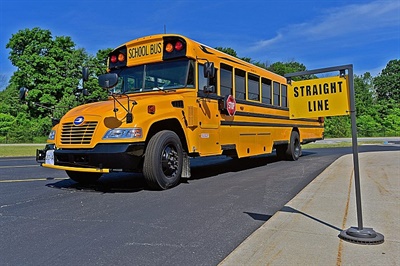 On Saturday, June 11, Brownsburg East Middle School hosted bus drivers from around the state at the annual School Transportation Association of Indiana’s (STAI) School Bus Safety Competition. This Safety Competition was designed to recognize excellence in school bus drivers as well as afford them the opportunity to demonstrate the skills and responsible performance of their demanding jobs.

The general education competition was broken into three segments; pre-trip inspection, written test, and a skills test. The pre-trip event was scored as one event. The written and skills test was combined. The top winner of the written and skills tests is afforded the opportunity to represent Indiana at the International Safety Competition. This year, the International Safety Competition will be held July 17 in Greensboro, North Carolina.

The special needs competition was similar to that of the general education competition, but with some additional events. As in the real world, during the special needs driving course, the driver and attendant also had to contend with the distractions of managing two students with emotional disabilities. The two “students” were picked up at the start of the course and dropped off at the end. The special needs bus driver and attendant also had to demonstrate car seat securement, an emergency event, wheelchair loading, and wheelchair securement. The top winning special needs team came from Brownsburg Schools.  Anna Webb and Shari Fulner will represent Indiana at the National Safety Competition during the TSD Conference and Trade Show. The conference will be held March 17-22, 2017 in Dallas/Frisco, Texas.

A total of 100 bus drivers and bus attendants, representing over 35 school corporations from around the state of Indiana, competed in this event. Another 100 volunteers helped make this Safety Competition a success!

Rookie of the Year

I play on the radio from 7 am -1 pm weekdays on 98.9 FM WYRZ and WYRZ.org. Follow me on twitter @WYRZBrianScott or e-mail me at brian@wyrz.org.
Previous Tuesday Morning Traffic Stop Yields Two Arrests in Vigo County
Next Coats Statement on FBI Announcement Regarding Clinton Email Investigation