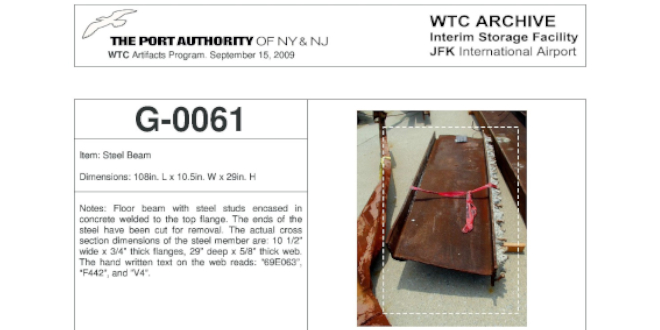 Brownsburg 9-11 Memorial to be Dedicated on Patriots Day

Brownsburg Fire Chief Larry Alcorn will lead a group of speakers from local public safety and Brownsburg Town Government to talk about the importance of the memorial, and the decade long process of establishing it. The memorial features a beam which was recovered from the World Trade Center in New York City, after its collapse. In addition to the dedication, Brownsburg Fire Marshall Steve Jones and Deputy Fire Marshall Tony Smith have committed to stay with the memorial for the entire day, lest duty calls.

The memorial is centered in a sprawling new commercial and residential development in downtown Brownsburg, near the entrance of Arbuckle Park. The contemporary design presents the beam as it was installed in the World Trade Center, similar to its original function and position. The beam was carefully oriented such that it points directly toward One World Trade Center, the beam’s former home. Two large storyboards will detail the events of the day, and the impact the attacks has had on the lives of all Americans. The storyboards were composed to memorialize brave sacrifices, honor lives lost, and educate future generations.

In the of 2009, Brownsburg firefighters learned of the opportunity to secure an “artifact” of the World Trade Center for the purpose of memorials. After securing a court order issued by the United States District Court of Southern New York, ownership of the artifact was transferred to Brownsburg Fire Territory. On April 7th of 2010 four Brownsburg Firefighters traveled to JFK Airport to take possession of the artifact. Through a decade of work, the memorial has finally found its home. A short description of the artifact is attached to this message.

I play on the radio from 7 am -1 pm weekdays on 98.9 FM WYRZ and WYRZ.org. Follow me on twitter @WYRZBrianScott or e-mail me at brian@wyrz.org.
Previous Weekend Work: Construction around Marion County
Next Single Vehicle Motorcycle Accident Sends One to the Hospital in Clay County