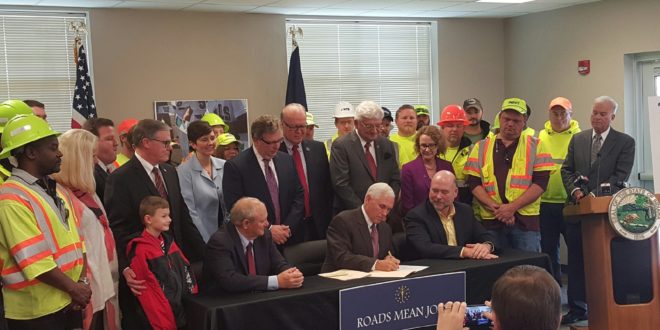 Brown, chair of the House Committee on Ways and Means, said the newly created task force is charged with developing a long-term plan for state highway and bridge needs.

“In the coming months, Luke and I will be leading a panel in exploring long-term funding options dedicated to supporting Indiana’s infrastructure,” Brown said. “We will present our findings to the General Assembly when it reconvenes in January.”

“I am confident that, through the FIRSST task force, we will be able to identify new road-funding solutions that can be utilized when we draft the next two-year budget,” said Kenley, chair of the Senate Committee on Appropriations and member of the Senate Committee on Tax and Fiscal Policy. “This task force is a vital step toward making well-informed decisions as we maintain Indiana’s status as the Crossroads of America.”

The task force was established under Indiana’s recently enacted law directing more than $800 million to state and local roads over the next two years while providing city and county governments additional tools to address their road funding needs.

I play on the radio from 7 am -1 pm weekdays on 98.9 FM WYRZ and WYRZ.org. Follow me on twitter @WYRZBrianScott or e-mail me at brian@wyrz.org.
Previous Coats Discusses GAO Report on Reducing Government Waste
Next Corporate Sponsor Named, Route Unveiled for Hendricks County Torch Relay