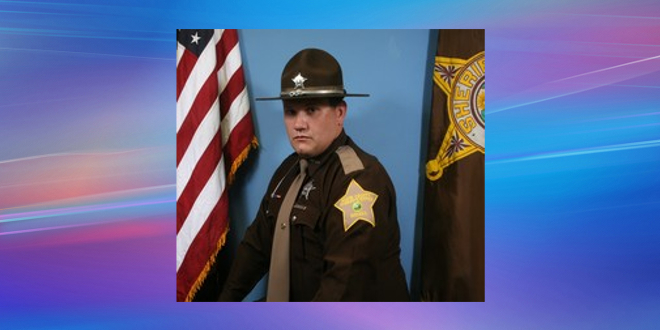 Deputy Pickett, a Brownsburg Indiana native and 2002 graduate of Brownsburg High School has been employed by the Boone County Sheriff’s Office since July of 2015. Prior to his work with BCSO he served as a deputy for the Tipton County Sheriff’s Department from November of 2013 until July of 2015. Deputy Pickett also served as a jailer at the Marion County Jail from 2010 until 2013.

Deputy Pickett was the lead K9 handler for the Boone County Sheriff’s Office and patrolled with his partner Brick for more than 2 years.

The Lebanon Police Department was originally on Yates Street to serve an active arrest warrant on Hillary Williams, wanted for residential entry. She was not located.

At 9:32 a.m. while there, they spotted John Baldwin Jr. who was known to have an active arrest warrant for Violation of Probation for Possession of a Syringe. When ordered to stop, Baldwin Jr. and two other people got into a silver Ford Focus and fled the scene. The officers began to chase the vehicle as it fled through the streets of Lebanon. A deputy from the Boone County Sheriff’s Office joined the pursuit to assist the officers. At approximately 9:39 a.m. the vehicle came to a stop on Indian Springs Road and the occupants fled on foot. While chasing one of the suspects the Boone County Deputy was shot.

One suspect, 21 year old Anthony Baumgardt of Lebanon was shot by police. He is the suspect believed to have shot Deputy Pickett. Another occupant of the vehicle, 55 year old John Baldwin Sr. fled on foot. Baldwin Jr., the driver, fled again in the silver Ford. He was later apprehended by officers on I-65 after another pursuit.

Deputy Jacob Pickett and his family continue to selflessly serve even after his fatal wound by donating his organs.

The last person killed in the line of duty from the Boone County Sheriff’s Office was Sheriff John Pepper in 1935.

I play on the radio from 7 am -1 pm weekdays on 98.9 FM WYRZ and WYRZ.org. Follow me on twitter @WYRZBrianScott or e-mail me at brian@wyrz.org.
Previous IMPD homicide investigators arrest suspect for her involvement in the death of victim on Birch Avenue
Next Homicide detectives continue to investigate after a man was fatally shot early this morning