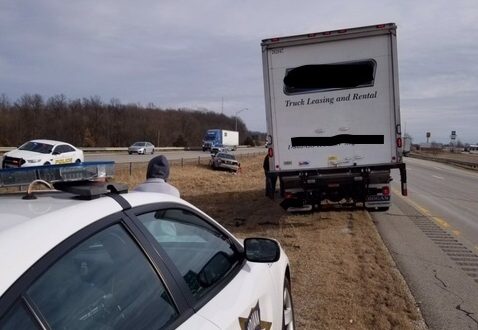 Putnam County—This afternoon at approximately 12:30, Indiana State Police troopers and Putnam County emergency agencies responded to a one-vehicle crash in the eastbound lanes of Interstate 70 near the 40.5 mile marker.

Preliminary investigation revealed, 23-year-old, Kayleb M.T. Brissey of Brownsburg, IN., was operating   a 2006 Ford Crown Victoria eastbound on I-70 near the 40.5 mm, when he lost control and struck the guardrail on the south edge of the roadway. The Ford Crown Victoria then spun into the roadway barely striking a large box truck.

Brissey was transported to Putnam County Hospital via Putnam County Operation Life for what is believed to be a minor head wound.

After treatment, Brissey was incarcerated in the Putnam County Jail for Operating While Intoxicated (felony) and Reckless Driving (misdemeanor). A presumptive test indicated Brissey was .214 BAC. Other chemical test results are pending.

Minutes earlier, ISP Region V Dispatch had alerted troopers to a reckless and possibly impaired driver, eastbound on I-70 from the Clay County area. The suspect vehicle matched the description of the vehicle involved in this crash. Troopers were attempting to locate the vehicle at the time of the crash.

Box truck driver information not available at this time. He was not injured and no tickets were issued.

I play on the radio from 7 am -1 pm weekdays on 98.9 FM WYRZ and WYRZ.org. Follow me on twitter @WYRZBrianScott or e-mail me at brian@wyrz.org.
Previous Narcotics Search Warrant Leads to Officer Involved Shooting
Next Lessonly Plans More Growth in Indianapolis After East Coast Capital Infusion