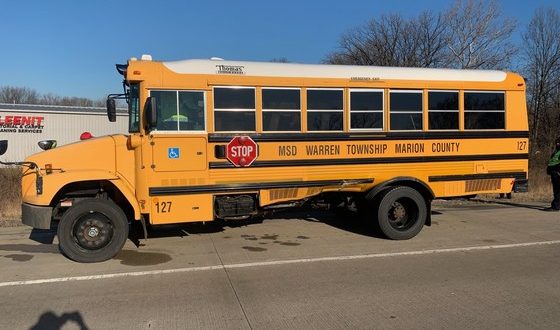 Indianapolis, IN – Thursday morning at 9:26 emergency personnel were called to the the scene of a crash involving a passenger car and a school bus on I-70 near Emerson Avenue. When first responders arrived they located a silver car heavily damaged in sitting in the left lane of I-70. A school bus was ahead of the wrecked car on the right shoulder. The driver of the car, 36 year old Sarah Nuckols of Indianapolis, was injured in the crash and transported to the hospital. The Warren Township School Bus was occupied by seven students and three adults including the driver. Of the bus occupants, two juveniles and one adult passenger was transported to area hospitals with non-life threatening injuries.

Preliminary investigation has led troopers to believe the silver car was driving at a high rate of speed along I-70 westbound when the driver lost control and spun into the side of the bus. Nuckols, the driver of the car, was transported to the hospital and subsequently arrested for driving under the influence of alcohol.

Firefighters and Paramedics from both the Indianapolis Fire Department and the Indianapolis Emergency Medical Service responded to the scene and treated the patients. Each occupant of the bus was evaluated by a medic before being transferred to another bus to return to the school. Staff from Warren Township Schools arrived on scene along with Warren Township School Police Officers to assist. As a requirement with any crash that results in potential serious injuries, the bus driver was tested for alcohol and that test was negative. The right three lanes of I-70 were closed for approximately one hour while the students were treated and transferred to another bus.

Any criminal charges mentioned above are merely accusations. Any formal charges are determined by the Marion County Prosecutor’s Office upon review of the case.

I play on the radio from 7 am -1 pm weekdays on 98.9 FM WYRZ and WYRZ.org. Follow me on twitter @WYRZBrianScott or e-mail me at brian@wyrz.org.
Previous Weekend Work: Construction Around Marion County
Next Indiana Department of Education Announces Additional Dual Language Immersion Pilot Program Grant Recipients