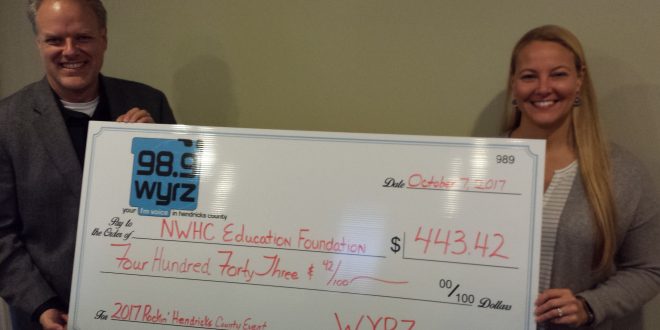 Brownsburg, IN – The first ever Rockin’ Hendricks County event took place October 7th with ten riders competing on a mechanical bull for charity. The event was hosted by WYRZ and the Avon-Washington Township Parks Department.

This unique event provided an opportunity for small charities that don’t have the funds or personnel to organize and sponsor a charity event to participate in this joint event. WYRZ and the participating charities raised money through donations focused on the success of their selected bull rider. The charity whose rider stayed on the longest retained all the donation money they collected for the event.

Bull-riding wasn’t the only determining factor; the organization that raised the most money specifically for this event retained 75% of their donations with 25% going to WYRZ. The remaining nonprofits did a 50/50 split with WYRZ.

The rider that stayed on the longest was Stacey Begle who represented the Northwest Hendricks County Education Foundation. Angela Nelson, representing Rock Steady Boxing of Brownsburg, raised the most money.

“It was a big success!” says WYRZ Executive Director Shane Ray. “We were so happy to partner with all the non profits in and around Hendricks County, and no one walked away empty handed.” Ray goes on to say that planning for Rockin’ Hendricks County 2018 is underway. The event will be moved to The Hendricks County 4-H Fairgrounds, the 2018 Presenting Sponsor. Begle and Nelson have been invited back to defend their titles.

WYRZ is now looking for new committee members as well as non profits that want to compete in Rockin’ Hendricks County 2018. If you’re interested, call WYRZ at 317-852-1610, or email them at admin@wyrz.org .

I play on the radio from 7 am -1 pm weekdays on 98.9 FM WYRZ and WYRZ.org. Follow me on twitter @WYRZBrianScott or e-mail me at brian@wyrz.org.
Previous IMPD to Create E-Commerce Exchange Zones at District Headquarters
Next Rokita Fights for Concealed Carry Reciprocity