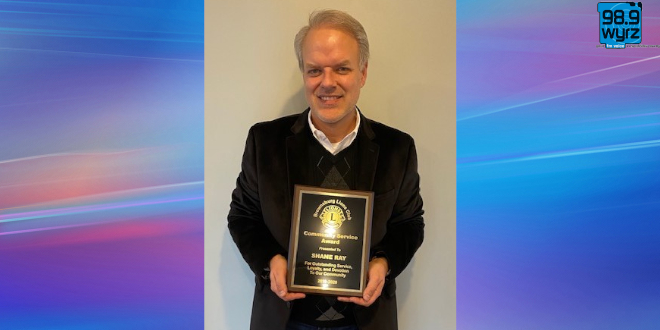 On Friday December 18th, officers of the Brownsburg Lions Club dropped by to surprise WYRZ Executive Director Shane Ray with a special award. It was the Community Service Award for outstanding service, loyalty and devotion to the community in 2019 to 2020.

Xinopoulos said they wanted to make the presentation earlier this year but due to Covid 19 related roadblocks they were forced to wait till the end of the year. Each presenter said they could think of no better deserving person than Ray for the award and hoped that he would keep being an example for the community.

Ray said he was surprised and deeply touched by the award and proclaimed that it would go on the wall at the radio station for all visitors to see. He went on to say he would continue to do what it takes to make sure the Brownsburg Lions never regret giving him the award.

Ray is the Executive Director of the nonprofit Hendricks County Education Media Corporation, better known as WYRZ 98.9 FM in Brownsburg.

I play on the radio from 7 am -1 pm weekdays on 98.9 FM WYRZ and WYRZ.org. Follow me on twitter @WYRZBrianScott or e-mail me at brian@wyrz.org.
Previous SNAP recipients in Indiana may now purchase online at ALDI stores, through a partnership with Instacart online grocery platform
Next Lt. Gov. Crouch Op-ed: Preserve women’s history, inspire others