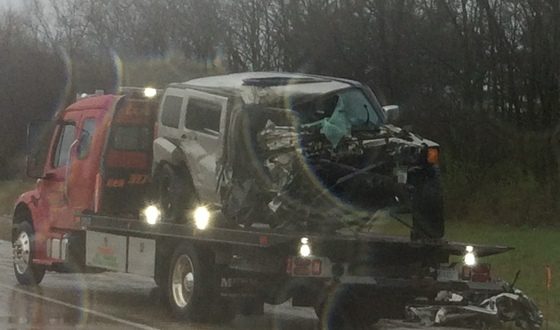 Wrong Way Driver Hits Semi on I-70, Seriously Injures One

Indianapolis, IN – A suspected drunk driver drove eastbound in the westbound lanes of I-70 for nearly one mile before striking a semi, critically injuring the passenger.

Around 3:30 this morning Indiana State Police Dispatchers began receiving 911 calls reporting a wrong way driver on I-70 near the 91 mile marker. Moments later those calls turned to reports of a serious crash at the 92 mile marker. Emergency crews arrived to find the aftermath of a high speed head on collision between a 2009 Hummer H2 and a semi tractor-trailer. The driver of the Hummer, 26 year old Moran Cuculisa Yener Oswaldo of Indianapolis was pulled from the wreckage by officers from the Hancock County Sheriff’s Office. He was alert and conscious and transported to Eskenazi Hospital with minor injuries. The passenger in the Hummer, 29 year old Angel Jesus Tzuy Pop was entrapped in the vehicle and required extrication by the Indianapolis Fire Department. He was transported to Eskenazi and is listed in very critical condition. The driver of the semi, 52 year old Ricardo Duran of California, was not injured.

I-70 was closed for nearly five hours while the crash was investigated and the wreckage was removed. This is an ongoing investigation with no further information to release at this time. The driver of the Hummer has been arrested on the preliminary charge of operating a vehicle while intoxicated causing serious bodily injury. Troopers will work with the Marion County Prosecutor’s Office to determine formal charges.

I play on the radio from 7 am -1 pm weekdays on 98.9 FM WYRZ and WYRZ.org. Follow me on twitter @WYRZBrianScott or e-mail me at brian@wyrz.org.
Previous Hendricks County’s “Kick In For Kids” Fundraising Goal is $16,770
Next Report of Children Playing in the Street Results in Arrest