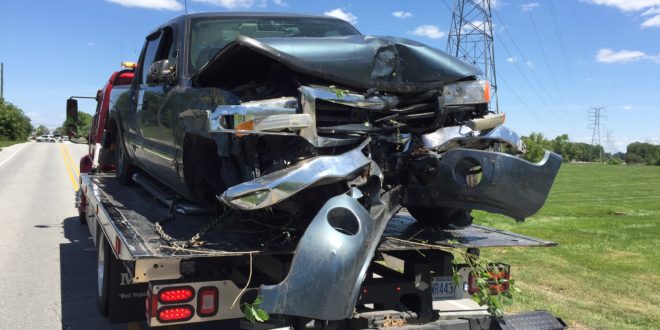 Indianapolis – Jimmy Lee Moore, 31 of Marion, Indiana was arrested late Wednesday morning after fleeing Trooper Corey Berfield in a 2006 GMC Sierra that had been reported stolen on May 8th of this year.

Tpr. Berfield, a nine year veteran of the state police, assigned to the Indianapolis Post, was on regular patrol when the License Plate Reader (LPR) in his patrol vehicle indicated a match on the truck Moore was driving as being a stolen vehicle.  Once Tpr. Berfield confirmed the vehicle was still reported as stolen he tried to make a traffic stop in the area of westbound I-70 and Emerson Avenue.  Instead of stopping, Moore fled from Tpr. Berfield, driving north on Emerson, eventually driving into the City of Lawrence, IN.  Moore ultimately ended up driving south on Post Road from Lawrence, until he crashed the truck into a wooded area on Post Road, about a half mile south of Brookville Road. 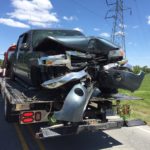 After crashing, Moore ran from the scene, leaving behind his female passenger, Tamara Trueblood, 42 of Swayzee, IN who was injured the result of the crash into the woods.  Trueblood was not wearing a seatbelt and was thrown under the dashboard of the truck when it struck a tree.  She was transported to Community East Hospital with a report of pain to her arm that was not a life threatening injury.  Trueblood was not arrested.

With the assistance of an IMPD K-9 officer and his K-9 partner, Moore was tracked to an area in the 8800 block of Raymond Street.  Moore was then taken into custody, without further resistance, by members of the Indiana State Police SWAT team within 10 minutes of fleeing on foot from the scene of the crash.  Moore was not bit by the K-9.

During the 21 minute pursuit, speeds ranged from 40 to 85 mph.  Over the course of the pursuit Moore is reported to have struck or sideswiped three other vehicles, including a school bus that was occupied only by the driver.  There were no injuries reported in any of these crashes.

License Plate Readers (LPR) have been used by the Indiana State Police since 2011.  Presently there are four state police cruisers that are LPR equipped assigned to the Indianapolis Post.  LPR’s are able to read and compare plate numbers to police computer records at a rate of more than 1,000 plates per minute.  Any returns indicating a match for a crime are independently verified by state police personnel prior to taking enforcement action.

Moore was transported to the Marion County APC for further processing.

The attached photo of Moore was taken at the scene where the pursuit ended.  Other photos included with this release are a picture of the crashed stolen truck and a photo of an Indiana State Police License Plate Reader

Persons named as arrested are presumed innocent until proven guilty in a court of law.

I play on the radio from 7 am -1 pm weekdays on 98.9 FM WYRZ and WYRZ.org. Follow me on twitter @WYRZBrianScott or e-mail me at brian@wyrz.org.
Previous Public Comment Sought on Five-Year State Plan Goals and Objectives for People with Disabilities
Next IMPD Detectives make arrests in connection with a 2015 murder investigation