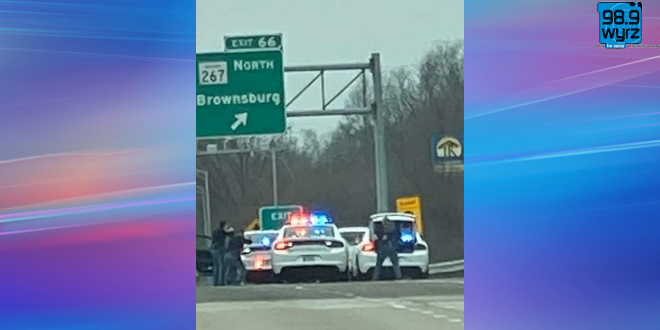 Vehicle Pursuit Ends on I-74 Near Brownsburg

Brownsburg, IN – An attempted traffic stop in Indianapolis began a pursuit that ended on I-74 near SR 267 this afternoon. At 12:11 p.m. an Indiana State Trooper attempted to pull over a vehicle for a traffic violation on Lynhurst Drive near Sumner Avenue. The vehicle failed to pull over and led police on a chase that made it’s way to I-74 westbound toward Brownsburg. As the suspect vehicle approached the area of SR 267 the driver slowed down and pulled to the right shoulder, Troopers were then able to box the vehicle in and get the driver to stop without collision. When the vehicle came to a stop troopers reported hearing gunfire coming from the vehicle. No officers fired their duty weapons. They were able to take cover behind their vehicles and Indiana State Police SWAT was dispatched to assist. With the assistance of the Brownsburg Police Department SWAT Team and ISP SWAT Team, the officers near the cars were moved to safety.

Once the officers were moved to safety, members of the SWAT team approached the vehicle and found an adult male unconscious and unresponsive. A tactical paramedic, who responded with ISP SWAT, immediately rendered first aid however the adult male was pronounced deceased on the scene. Preliminary investigation revealed the driver had an injury consistent with a self-inflicted gunshot wound and a firearm was located in the vehicle.

Investigators are still on scene along with crime scene technicians. The Hendricks County Coroner will conduct an investigation to determine the cause of death.

This is an ongoing investigation and the information is preliminary, at this time there is no further information to release.

I play on the radio from 7 am -1 pm weekdays on 98.9 FM WYRZ and WYRZ.org. Follow me on twitter @WYRZBrianScott or e-mail me at brian@wyrz.org.
Previous Statewide 911 Board adds Translation Capabilities to Text to 911
Next Hamilton Center Implements Starting Salary Increases