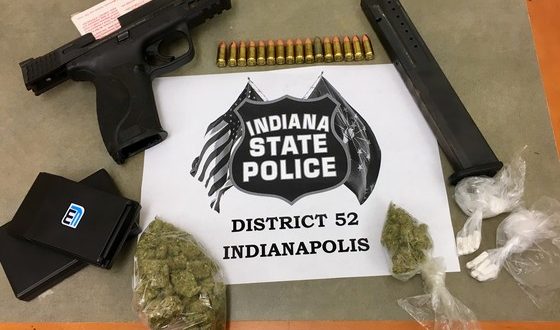 Indianapolis, IN – A pair of traffic stops overnight resulted in three arrests on gun and drug charges.

Around 11:45 p.m. Monday September 30th, Trooper Christopher Stout pulled over a white Honda near Washington and Post because neither the driver nor the passenger were wearing a seat belt. When Stout approached the vehicle he could see a handgun laying in the back seat. It was determined neither occupant had a permit to carry a handgun and both were asked to get out of the car. A subsequent investigation into the handgun led Troopers to discover another loaded handgun under the driver’s seat along with two rifles and a shotgun in the truck. The shotgun and one of the rifles had been modified into handguns. Also located in the vehicle was a bag of methamphetamine. The driver, 20 year old David Lucas of Indianapolis, was arrested and transported to the Marion County Jail. The female passenger was released from the scene. Lucas now faces the preliminary charges of possession of methamphetamine and carrying a handgun without a license.

Just after midnight, October 1st, 2019, Senior Trooper Joel Flores stopped a vehicle because the driver failed to dim their bright headlights and the vehicle had loud exhaust. During the course of this traffic stop Flores located methamphetamine, several pills, marijuana and a loaded handgun. The passenger was also found to be in possession of marijuana.

All criminal acts mentioned in this release are merely accusations and are alleged. All suspects are presumed innocent until and unless proven guilty in the court of law.

I play on the radio from 7 am -1 pm weekdays on 98.9 FM WYRZ and WYRZ.org. Follow me on twitter @WYRZBrianScott or e-mail me at brian@wyrz.org.
Previous Business Ownership Initiative Receives CDFI Certification, $305K in Grant Awards
Next Donors to Break Ground on Chapel, Bunkhouses at Sheriffs’ Youth Ranch