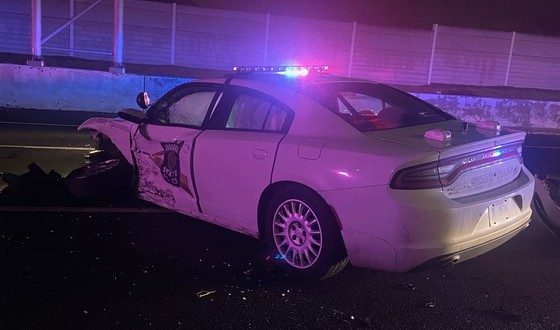 Indianapolis, IN – This morning, at approximately 3:40 a.m. several Indiana State Troopers and other emergency responders were called to the scene of a multi-vehicle serious crash. The crash occurred on I-465 southbound near the 18.2 mile marker on the west side of Indianapolis and involved at least eight vehicles. One person from that crash was severely injured and transported to the hospital, several lanes of I-465 were closed for the investigation.

Trooper Kendra Gonzalez, who was off duty, was called out to the scene to assist with the crash reconstruction. When she arrived she parked her car in the closed area of the crash scene with her emergency lights activated.

At 6:48 a.m. Trooper Gonzalez’s Dodge Charger was struck by a Ford Fusion driven by 45 year old Tony Staker of Indianapolis. Gonzalez was standing outside her vehicle when the collision occurred, she was not injured.  A subsequent investigation led to probable cause that Staker was under the influence of alcohol, he was taken into custody and transported to a local hospital for a blood draw. The result of that test is pending. He was then transported to the Marion County Jail and incarcerated for operating a vehicle while intoxicated.

The cause of the multi-vehicle crash is still under investigation at this time and there is no further information to release.

All crimes mentioned in this release area alleged and the charges listed are merely accusations at this time. Actual charges will be determined by the Marion County Prosecutor’s Office upon review of the investigation. All suspects are presumed innocent until and unless proven guilty in court.

Troopers in the Indianapolis District arrested five intoxicated drivers overnight (December 31st into January 1st). Two involved crashes, and another one was a wrong way driver on Same Jones Blvd.

Unrelated to the above incidents, 18 year old Javin Moppins of Terre Haute was arrested just after midnight after fleeing from Trooper Adarius Washington, who was trying to pull him over for 105 mph in a posted 55mph zone. The  pursuit came to conclusion when the suspect stopped on his own after exiting the interstate and turning onto several city streets.

I play on the radio from 7 am -1 pm weekdays on 98.9 FM WYRZ and WYRZ.org. Follow me on twitter @WYRZBrianScott or e-mail me at brian@wyrz.org.
Previous DCtheDJ
Next Two Avon High School Seniors Win Prestigious Lilly Endowment Scholarships