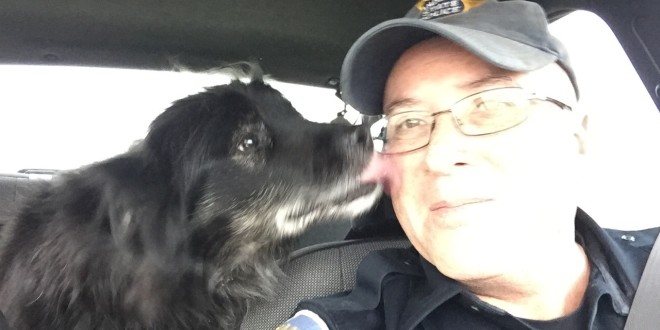 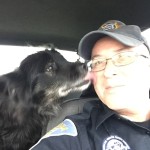 Wabash County – This morning at approximately 11:00 a.m., Master Trooper Joe Swisher was able to return a dog, Sadie, to her owner who was not aware the fleet footed canine had escaped from her kennel.

Trooper Swisher was conducting routine patrol, on U.S. 24 near Wabash County Road 700 West, when he observed vehicles swerving to avoid hitting a dog which was running in the roadway. Swisher activated the air horn on his police car in hopes of getting the dog, later identified as Sadie, to go back to the roadside. The loud horn caused Sadie to run to the median. Swisher pulled up to the dog and opened the door to his police car. Sadie jumped into the car.

Sadie was wearing a dog tag with the address and phone number to Cornerstone Veterinary Services in Urbana. Swisher transported Sadie to Cornerstone. With the help of staff members, Swisher was able to make contact with Sadie’s surprised owner who was not aware she had escaped from her outdoor kennel. Swisher transported Sadie back to her Wabash County home, which was located approximately one mile from where she was found.

“I am glad this situation had a happy ending,” stated Master Trooper Swisher. “This should serve as a reminder to all pet owners to make sure their animals are chipped or have identifying tags. It makes reuniting owners with their pets a much quicker and easier process.”

I play on the radio from 7 am -1 pm weekdays on 98.9 FM WYRZ and WYRZ.org. Follow me on twitter @WYRZBrianScott or e-mail me at brian@wyrz.org.
Previous Brownsburg Parks Issues RFI for Mowing Services
Next State Auditor Announces Live-streaming of Board Meetings