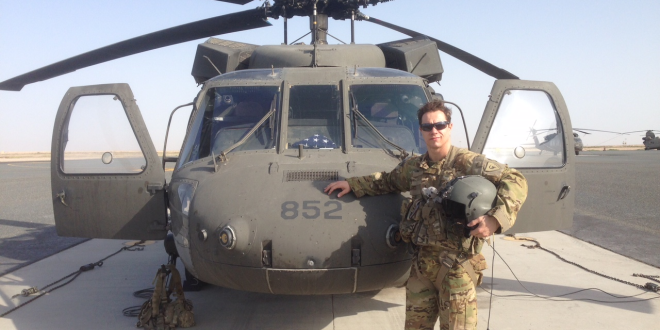 Indianapolis – Trooper David Ploog recently returned to his Indiana State Police duties after nearly a year long Military Deployment in North Kuwait. Ploog is a 2002 graduate of Arsenal Tech High School and a four year Indiana State Police veteran who primarily patrols Shelby County. He is also active in the Indiana National Guard as a helicopter pilot and has had two previous deployments to Iraq in 2003 and 2009. 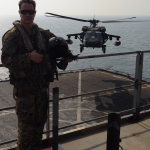 A Chief Warrant Officer 3 in the Indiana Army National Guard, Ploog and his unit, C. Co. 1-137th AVN (ASSLT), are stationed in Shelbyville Indiana.  He was activated Feb 1, 2015 and spent the first 2 months at Ft. Hood TX, later deploying to north Kuwait April 2, 2015.  His unit was tasked with V.I.P. security as well as Command and Control for the Kuwait Area.  He flew a lot of Generals, Foreign Dignitaries, and any other people identified as a V.I.P.  In his time spent not flying, he did a lot of desert training and over water operations in the gulf, including landing on a few ships in the Northern Arabian Gulf.  Ploog returned home January 29, 2016.  During his deployment he flew just over 300 hours (3 years of flying in 10 months).  “When I wasn’t flying I kept myself busy, in the gym, training and even taking an EMT course“ said Ploog. He also said “The hardest part about being over there was watching my kids grow up on FaceTime.” 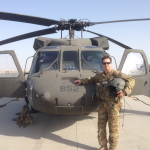 In 2014 Trooper David Ploog was credited with saving the life of a crash victim on the east side of Indianapolis whose leg was amputated in a serious crash. He has recently joined the Indiana State Police Underwater Search and Rescue Team as a rescue diver.  After weeks of catching up on missed police training, Ploog will return to full duty later this week. 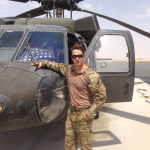 On Behalf of the Indiana State Police, an Indiana Citizen and a friend I would like to sincerely thank Trooper Ploog and all military veterans for their selfless service to our country. Ploog is one of many Troopers statewide who actively serve in our Military.

I play on the radio from 7 am -1 pm weekdays on 98.9 FM WYRZ and WYRZ.org. Follow me on twitter @WYRZBrianScott or e-mail me at brian@wyrz.org.
Previous Peru Teen Killed in Miami County Crash
Next Coates op-ed: Let the People Decide