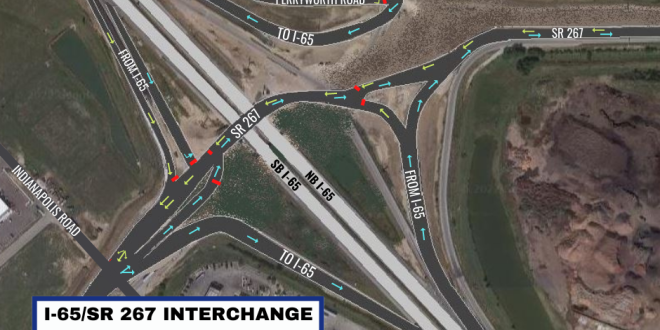 BOONE COUNTY, Ind. – The Indiana Department of Transportation announces a shift in traffic at the State Road 267/I-65 interchange on or after Saturday night, August 6 and into Sunday morning, August 7. This will allow crews to begin Phase Three of the ongoing interchange modification project, near Whitestown, weather permitting.

Traffic will now shift to the north bridge path. The westbound S.R. 267 ramp to I-65 will be closed to traffic. The official ramp detour follows I-65 northbound to S.R. 39 to I-65 southbound. The ramp should reopen after six/seven-weeks. The eastbound S.R. 267 on-ramp to I-65 will remain open during this phase. During Phase Three, crews will construct roadway approaches to the existing S.R. 267 bridge and construct an overlay on the existing bridge. Crews will also place surface asphalt, pavement markings, and necessary signage to complete the roadway. The map in this release contains more details than the previous one.

This project was awarded to Beaty Construction for $62.8 million. The project includes building a new interchange on I-65 at Boone County Road 550 South and redesigning the I-65 and S.R. 267 interchange. Both will be Diverging Diamond Interchanges, (DDI). The contract completion date is set for August of 2022.

A DDI is a type of interchange in which the two directions of traffic on a non-highway road cross to the opposite side on both sides of a bridge. It is unusual in that it requires traffic on the highway overpass to briefly drive on the opposite side of the road from what is customary. When entering the DDI, drivers cross over to the left side of the bridge, guided by signals, signs and pavement markings. DDIs are designed to be safer, more efficient and more cost effective than traditional diamond interchanges.

INDOT reminds drivers to use caution and consider worker safety when driving through a construction zone.

I play on the radio from 7 am -1 pm weekdays on 98.9 FM WYRZ and WYRZ.org. Follow me on twitter @WYRZBrianScott or e-mail me at brian@wyrz.org.
Previous Indiana State Police Warn of Indiana Department of Workforce Development Text Scam
Next Indianapolis Resident Receives 12-Year Sentence for Social Media App Scam