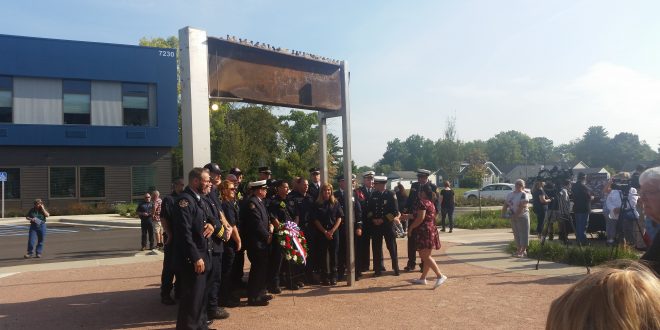 Brownsburg – A post on the Town of Brownsburg Facebook page came out on the afternoon of 9/11 this week. They sent out a big “Thank you”  to the many members of the public who attended the Brownsburg Fire Territory dedication ceremony for the 9-11 Memorial at Arbuckle Commons on Tuesday.  A 1500-pound steel beam recovered from the World Trade Center and secured by Brownsburg firefighters in 2010 served as the tribute’s centerpiece. The Brownsburg Rotary Club has been raising funds for the memorial. Club member Kathy Dillon was at the event and said emotions are still strong 18 years later.

“It’s still almost unreal and unbelievable that this could even happen here in our great nation. My heart goes out to the victims the families that are still feeling the pain of this event. I’m also a bit of frustration that something like this could happen or people would even think about doing something like this.”

Dillon said a new fundraising event is coming up soon.

“The Rotary Club here in Brownsburg is doing our Hops and Vines rotary event on October 5th at 6 p.m. to 9 p.m. The funds that are raised from that will be donated towards the 9/11 Memorial here in Brownsburg.”

Fundraising continues throughout the year. To help finish the details of the memorial, you can reach out to the Brownsburg Fire Territory if you’d like to donate. #911memorialatarbuckle

I play on the radio from 7 am -1 pm weekdays on 98.9 FM WYRZ and WYRZ.org. Follow me on twitter @WYRZBrianScott or e-mail me at brian@wyrz.org.
Previous Applications Being Accepted for Danville Chamber of Commerce Executive Directorship Opening
Next Indiana State Police once again remind residents to beware of phone scams