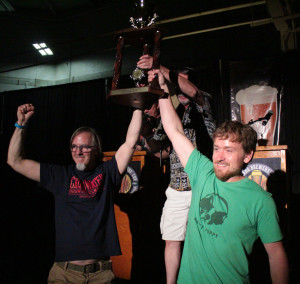 INDIANAPOLIS– The 17th annual Indiana State Fair Indiana Brewers’ Cup Competition, held July 10-11, marked yet another successful year with nearly 1,300 entries, the most in competition history. This year’s professional champion Chilly Water Brewing Company of Indianapolis, swept through the competition, , as they walked away with Professional Best of Show, Indiana Brewery of the Year, and Grand Champion Brewery of the Year.

The home brew category was no hop in the park. Tim Palmer of Foam Blowers of Indiana (FBI) also won across the board, taking the titles of Home Brew Best of Show and Home Brewer of the Year. FBI was also awarded Home Brew Club of the Year and Bill Friday Home Brew Club Award. 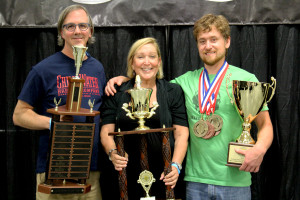 This was a year of many firsts for the competition, marking the first time the Brewers’ Cup was open to the general public, including a tasting and awards ceremony reception.  Entry was expanded to include ciders and meads, helping the event achieve the most entries in competition history, showcasing a vast variety of top home brewers and professional brewers. As one of the nation’s largest competitions, entries were received from the likes of Michigan, Ohio, and Illinois, to Texas, South Dakota, and Oklahoma. This year also saw a record number of judges, just over a hundred, including a judge from Taiwan.

I play on the radio from 7 am -1 pm weekdays on 98.9 FM WYRZ and WYRZ.org. Follow me on twitter @WYRZBrianScott or e-mail me at brian@wyrz.org.
Previous Indy Chamber applauds formation of Regional Development Authority
Next IndyGo Electric Buses Now Serving Passengers