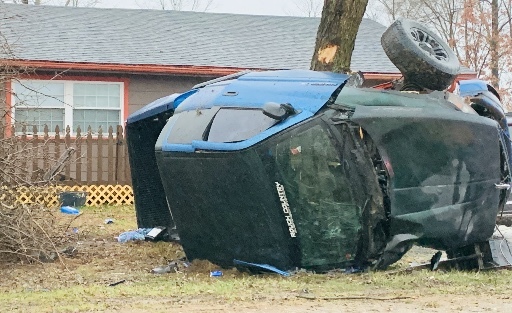 Vigo County – November 30, 2019, at approximately 7:21 a.m., Senior Trooper Ted Robertson and the Vigo County Sheriff’s Department responded to a personal injury accident on west Lombardi Drive, just west of State Road 63 that resulted in the arrest of a Terre Haute man for driving while intoxicated and leaving the scene of a personal injury accident.

Preliminary investigation revealed that Ian C. Wilson, age 19, of Terre Haute, IN, was driving his Dodge Ram pickup truck west on Lombardi Drive when he left the roadway, striking a tree, causing his pickup to go airborne.  The truck landed on the passenger’s side, slid into a large tree, and came to an abrupt stop.

Homeowners near the accident scene stated that moments after the crash, Wilson climbed out of the vehicle and started walking away from the accident scene.  Wilson was located approximately half a mile away, on foot, by Senior Trooper Ted Robertson and the Vigo County Sheriff’s Department. Further investigation revealed that Wilson had a blood alcohol content of .22%.  Wilson was injured from the accident and transported to Regional Hospital for medical care. Once cleared medically, Wilson was arrested and taken to the Vigo County Jail where he is currently being held on bond.

All Suspects Are Presumed Innocent Until Proven Guilty in a Court of Law.

I play on the radio from 7 am -1 pm weekdays on 98.9 FM WYRZ and WYRZ.org. Follow me on twitter @WYRZBrianScott or e-mail me at brian@wyrz.org.
Previous IMPD Homicide Detectives Make Arrest in Homicide
Next Online Shopping this Holiday Season? Be Sure to Stay Safe!