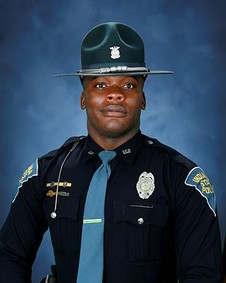 Boone County, IN – An Indiana State Trooper is recovering from serious injuries sustained after being struck along the interstate near Zionsville.

Five year Indiana State Police veteran Ronneal Williams had a van pulled over for a traffic violation near the 4 mile marker on I-865 east bound. Williams was on the right shoulder and was standing on the passenger side of the van when the collision occurred. An eastbound 2011 Ford Fusion, driven by 19 year old Ramon Michel Jr. of Indianapolis, struck the rear of Trooper Williams’ police car. The force of the impact sent the police car into the rear of the van, the van then struck Trooper Williams and sent him airborne over a guardrail. Williams was able to use his police radio to call for help. Emergency crews from Zionsville and Whitestown Fire Departments responded to the call and transported Williams and the other two drivers to St. Vincent’s Hospital.

Preliminary investigation by Indiana State Police Crash Reconstructionist Brock McCooe indicates the Ford Fusion veered onto the shoulder before striking Williams’ car. Investigators are still on scene working to find out what caused the ford to drive onto the shoulder. Anyone who may have witnessed the crash or the moments leading up to the crash are asked to call the State Police at 317-899-8577.

Trooper Williams remains in the hospital in serious but stable condition. The extent of the injuries suffered by the other drivers is not known at this time however they are believed to be non-life threatening.