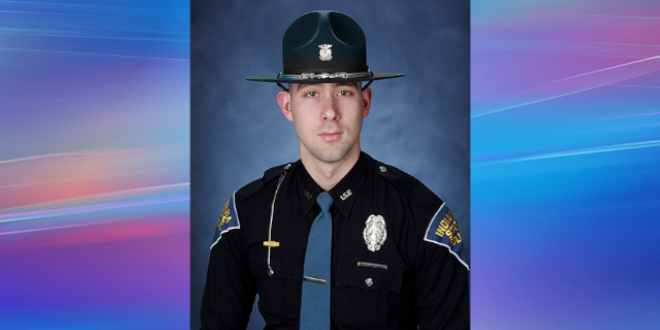 (Tippecanoe County, IN)- The Indiana State Police is mourning the loss of one of its own after a single vehicle crash late Friday night on Old State Road 25 near Stair Road. The crash claimed the life of Trooper Peter R. Stephan, 27, Lafayette, IN, who served with the Indiana State Police Department for four years.

The preliminary investigation by Indiana State Police Sergeant Rick Brown indicates at approximately 10:25 p.m., Trooper Stephan was traveling northbound on Old State Road 25, south of Stair Road, when his 2018 Dodge Charger police car entered a curve. For an undetermined reason, the Dodge left the east side of the roadway, rolled at least one time and struck a utility pole.  Trooper Stephan was going to help another trooper who had called for assistance in Americus prior to the crash.

As a result of the crash, Trooper Stephan suffered fatal injuries, and was pronounced dead at the scene.

Trooper Stephan is survived by his wife and six month-old daughter.  Family notifications have been made.

An account has been established through Old National Bank to accept monetary donations on behalf of the family of Trooper Stephan.  This is the only account which has been agreed upon by the family, and the opening of additional fund raising accounts is discouraged.

Those wishing to make a donation may do so at any Old National Bank branch under the name:

I play on the radio from 7 am -1 pm weekdays on 98.9 FM WYRZ and WYRZ.org. Follow me on twitter @WYRZBrianScott or e-mail me at brian@wyrz.org.
Previous Butler University Board of Trustees Extends Contract of President James M. Danko
Next Governor Holcomb Declares October 13-19, 2019 as Indiana Move Over Week