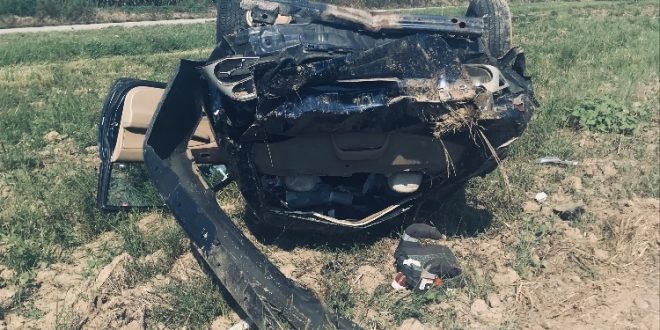 Single Vehicle Accident in Sullivan County Sends One to the Hospital

Sullivan County – September 6, 2019, at approximately 10:33 a.m., officers from the Indiana State Police and the Sullivan County Sheriff’s Department responded to a single vehicle crash on Old US 41 near County Road 100 East.

The preliminary crash investigation, by Master Trooper Tom Hanks, revealed that Rachel R. Hunt, age 25, of Sullivan, Indiana, was driving a 2003 Honda Civic on Old US 41 and was northbound near County Road 100 East near Paxton.  Hunt lost control of her vehicle rounding a turn and overcorrected, causing her vehicle to leave the roadway, and into an empty field. Hunt’s vehicle rolled three times before coming to a rest on its top, almost 100 yards from the roadway.  Hunt was able to climb out of the back window of her vehicle and waited for medical personnel to arrive.

Hunt was transported to Terre Haute Regional Hospital for a complaint of pain throughout her entire body.

Hunt was cited for speed to fast for road conditions, no seatbelt, and a learner’s permit violation, (no valid driver in vehicle).

The Indiana State Police wants to remind all drivers and passengers to wear their seat belts, and that the seat belt is designed to secure the occupants of vehicles against harmful movement that may result from a collision or a sudden stop.  “BUCKLE UP.”

I play on the radio from 7 am -1 pm weekdays on 98.9 FM WYRZ and WYRZ.org. Follow me on twitter @WYRZBrianScott or e-mail me at brian@wyrz.org.
Previous Garrett Police Arrest Two Juveniles in Last Monday’s Shooting Investigation
Next Man injured in Steuben County tree stand fall