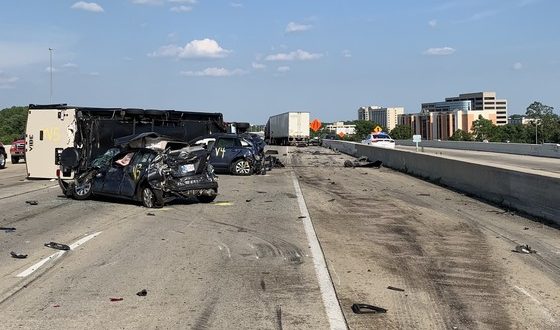 Indianapolis, IN – Just after 12:00 p.m. Sunday, emergency crews were called to I-465 eastbound near Keystone on the north side for reports of a multiple vehicle serious crash. Callers were reporting one vehicle was on fire and several people were injured. The crash closed all eastbound lanes of I-465. When emergency responders arrived they found an adult and two children unresponsive, all three were pronounced deceased at the scene. Seven other people were transported to area hospitals, one of those patients was described as very critical.

Preliminary investigation revealed a semi-tractor trailer was eastbound on I-465 and ran into the back of a line of cars who were backed-up traffic. The traffic in the area was slowed due to construction. The three deceased were all in one vehicle and were the first vehicle struck by the semi, after the initial impact five other vehicles were struck. Investigators believe unsafe speed was a factor in this crash. The east bound lanes are still affected as crews continue their investigation and clean-up. The driver of the semi was 57 year old Bruce Pollard of Sturgeon Missouri.

The victims of the fatal crash were 29 year old Alanna Norman Koons and her twin 18 month old daughters June and Ruby Koons of Indianapolis.

Pollard, was arrested last night on preliminary charges of three counts of reckless homicide and five counts of criminal recklessness causing injury. Investigators have determined he was allegedly driving well above the posted speed limit at the time of the collision.

Formal charges will be determined by the Marion County Prosecutor’s Office. All suspects are presumed innocent until and unless proven guilty in court.

I play on the radio from 7 am -1 pm weekdays on 98.9 FM WYRZ and WYRZ.org. Follow me on twitter @WYRZBrianScott or e-mail me at brian@wyrz.org.
Previous Death Investigation at Hammond Marina
Next One Person Killed in Single Vehicle Crash along I-70