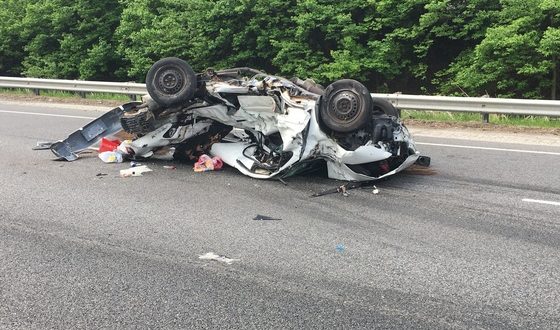 Serious Crash on I-465 Claims the Life of One Person

Indianapolis, IN – A two vehicle crash on the southwest side of Indianapolis has claimed the life of one person.

Just before 10 o’clock this morning emergency crews were called to I-465 eastbound near Kentucky Avenue for reports of a serious crash involving a semi and a passenger car. Some callers were reporting the driver of the car was possibly deceased. Upon arrival, medics from the Decatur Township Fire Department extricated the driver from the wreckage, despite life saving efforts the driver was pronounced deceased on the scene. The driver of the semi was not injured.

Investigators determined a small passenger car was originally on Mooresville Road just east of Flight School Road, this portion of the road ends at the interstate. For unknown reasons the vehicle sped through the end of the road, struck a guard rail and a line of trees before going airborne and landing on the eastbound lanes of I-465. A semi-tractor trailer traveling on I-465 struck the driver’s side of the passenger car. Investigators are working to determine the reason the driver ran off the road, however drugs or alcohol are not believed to be a factor in this crash.

The investigation is ongoing and State Police Crash Reconstructionists will examine all the evidence in an effort to determine a cause. Troopers will wait for the Marion County Coroner’s Office to determine a cause of death.  Family members have been notified however have asked us to withhold the victim’s identification until extended family can be notified, we will respect those wishes. 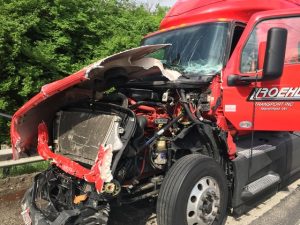 The driver of the semi was Mark Carnes of Canton Ohio, he was not injured nor was he believed to be under the influence of drugs or alcohol. I-465 was closed for nearly three hours while the crash was investigated and the wreckage was removed.

I play on the radio from 7 am -1 pm weekdays on 98.9 FM WYRZ and WYRZ.org. Follow me on twitter @WYRZBrianScott or e-mail me at brian@wyrz.org.
Previous Secretary of State Connie Lawson warns Hoosiers to disregard letters claiming to be a ‘state voter report’
Next Citizen Tip Leads to Arrest by Indiana Conservation Officers after Manhunt in Hoosier National Forest