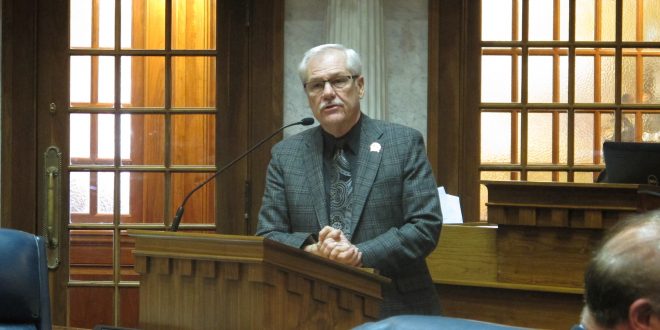 Indianapolis—Senator Jim Arnold (D-LaPorte) was honored as Senator of the Year at the Aviation Indiana Annual Conference in Michigan City at the Blue Chip Casino Wednesday.

The annual aviation conference also recognized Sen. Arnold for his consistent support of airports, recognizing their contributions to the local community’s economic development strategy, during his ten years in the Senate.

During the 2016 legislative session, Sen. Arnold co-sponsored House Bill (HB) 1154 which allows for airport board members to meet electronically rather than in person. This bill went into effect July 1, 2016, and is saving governing bodies in aviation both time and effort in order to more effectively improve their airports.

“I am deeply honored by this recognition and recognize the importance of our airports,” Sen. Arnold said. “They are the front door to the community and the first impression that a prospective business notices when they come into the community. The airport is also the last thing they see as they fly out.”

This is the second time Sen. Arnold was recognized by the Aviation Indiana Annual Conference. In 2011, Sen. Arnold was awarded the same honor as Senator of the Year. Sen. Arnold’s experience and appreciation for aviation began long before he reached the Senate. His military services includes time spent as an air traffic controller in the Air Force.

I play on the radio from 7 am -1 pm weekdays on 98.9 FM WYRZ and WYRZ.org. Follow me on twitter @WYRZBrianScott or e-mail me at brian@wyrz.org.
Previous IMPD accident investigators are looking into fatal crash that closes West 56th Street for about 3 hours
Next Hendricks County’s Palin and Michaels appointed by Governor Pence