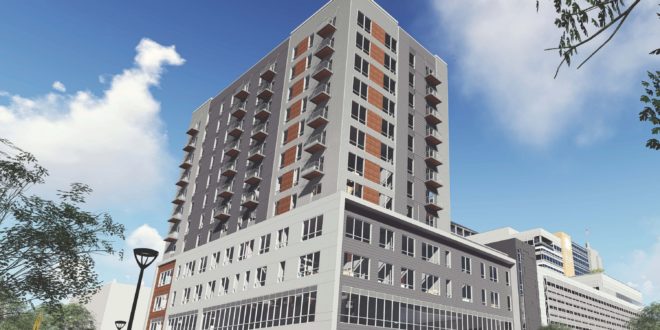 INDIANAPOLIS (May 17, 2016) – The Northeast Indiana Regional Development Authority (RDA) announced plans today to allocate $2.8 million in state funding from the Indiana Regional Cities Initiative to help fund the Skyline Tower in Fort Wayne. This is the first project to receive state funding through the Regional Cities Initiative, which will allocate a total of $126 million toward quality of place projects across three Indiana regions.

“The Indiana Regional Cities Initiative is on a roll in the Hoosier state, and the Skyline Tower project marks one more step forward as we work to retain and attract top talent for generations to come,” said Governor Mike Pence. “Across the state, communities are crossing county lines to plan and build Indiana regions into nationally recognized destinations to live, work and play. I commend our local elected officials, economic development professionals, business executives and Hoosiers throughout the 11-county Northeast Indiana region for their collaboration and swift action to advance regional development.”

“Additional residential housing for downtown Fort Wayne is in demand as we look to attract more talent to the area,” said John Sampson, president and chief executive officer of the Northeast Indiana Regional Partnership. “The Skyline Tower is exactly the kind of project for which the Regional Cities Initiative is designed – to encourage investment that makes Northeast Indiana a place people want to live and work. The project is already attracting other exciting and vibrant investments in the central city.”

Northeast Indiana’s Road to One Million plan outlines a short-term goal of 38 regional development projects in 11 counties totaling $400 million in quality of place investments, as well as a vision for more than 70 projects and $1.5 billion in public and private investment over the next 10 years. The plan, which aims to attain one million residents by 2020, acknowledges the need for increased class-A downtown residential units in Fort Wayne with the goal of achieving 2,000 total units.

The region’s plan is part of a statewide initiative spearheaded by Governor Pence to combat population stagnation as Indiana, like many of its Midwestern neighbors, remains a net out-migration state. Because of the initiative, 70 percent of the state’s population now lives in a region with a bold and viable plan for transforming its future.

“Skyline Tower is going to be a tremendous addition to our downtown as we continue to see momentum and record investments in Fort Wayne,” said Fort Wayne Mayor Tom Henry. “The city of Fort Wayne appreciates and values the commitment by the Indiana Economic Development Corporation and the RDA to move unique initiatives forward to enhance current and future economic development opportunities. Projects like Skyline Tower strengthen our position as a regional destination place for individuals, families and businesses.”

Just last week, Governor Pence joined North Central Indiana to break ground on the Studebaker facilities renovation, one of the region’s marquee projects outlined in its Innovate Indiana plan. The four-phase, $165.7 million project will anchor the establishment of South Bend’s Renaissance District and, once complete, is set to be the largest mixed-use technology campus in the Midwest.

I play on the radio from 7 am -1 pm weekdays on 98.9 FM WYRZ and WYRZ.org. Follow me on twitter @WYRZBrianScott or e-mail me at brian@wyrz.org.
Previous IMPD, Gleaners continue partnership to feed Indy’s hungry for second summer
Next Coalition for Court Access to work on civil legal aid