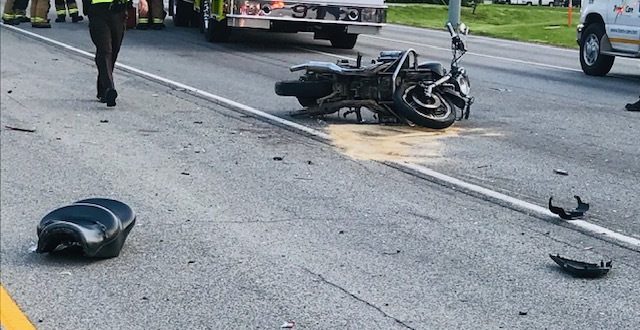 Reckless Driving Leads to a Deadly Accident in Vigo County

To ensure the safety of the public due to the high rate of speed, Trooper Maynor stopped pursuing the motorcycle near 56th Drive.  The motorcycle continued traveling south on US 41, driving recklessly, eventually striking a fully marked Vigo County Sheriff’s Department vehicle in the rear.  The Sheriff’s Department vehicle had all emergency lights activated and was traveling at a reduced rate of speed in the passing lane of US 41 south.  Upon impact, both the driver and passenger of the motorcycle were thrown from the motorcycle.  The driver, Jack D. Beegle, age 27, of Terre Haute, Indiana, was transported to Regional Hospital where he later succumbed to his injuries. The passenger, Brittany Marie Rose Waggoner, age 28, of Terre Haute, Indiana, was also transported to Regional Hospital, and was later airlifted to Methodist Hospital in Indianapolis.

The Vigo County Deputy involved in the accident has been identified as David G. McAdams, a three year merit Deputy with the Vigo County Sheriff’s Department.  Deputy McAdams was transported to Regional Hospital for a medical check and has been released.

An autopsy of the deceased will be performed Wednesday morning by the Vigo County Coroner’s Office, at Regional Hospital in Terre Haute.

Families have been notified.

The Indiana State Police will be conducting a full accident reconstruction of this accident.

I play on the radio from 7 am -1 pm weekdays on 98.9 FM WYRZ and WYRZ.org. Follow me on twitter @WYRZBrianScott or e-mail me at brian@wyrz.org.
Previous IMPD Hit and Run Detectives Seek Public Assistance Locating a Hit and Run Vehicle
Next Gov. Holcomb announces large-scale COVID-19 testing for Hoosiers