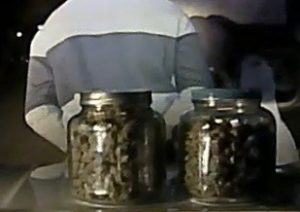 Vigo County—Last night at approximately 8:20, Indiana State Police Trooper Ian Portteus stopped a black Buick passenger car for a turn signal violation on westbound Hulman Street at Center Street. While conversing with the driver, Trooper Portteus noticed what appeared to be an odor of raw marijuana coming from the vehicle’s interior. Further investigation revealed two jars, with what appeared to be marijuana inside and estimated at two pounds, in a backpack in the vehicle’s trunk area. Other items of paraphernalia and commonly associated with the sale and/or use of marijuana were also located. Estimated street value is three to four thousand dollars.

The driver, Michael D. Shouse, age 24, of Terre Haute, IN. was incarcerated in the Vigo County Jail for Dealing Marijuana and Possession of Paraphernalia.

I play on the radio from 7 am -1 pm weekdays on 98.9 FM WYRZ and WYRZ.org. Follow me on twitter @WYRZBrianScott or e-mail me at brian@wyrz.org.
Previous Loss of Control on Wet Pavement Injures Driver
Next IMPD and the FBI Safe Streets Task Force foil plans of career criminal