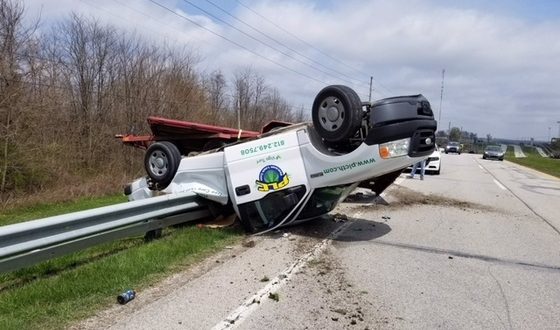 Preliminary investigation revealed a white 2006 Ford pickup, driven by 21-year-old Tyler L. Peters of Vincennes, IN., was westbound US 40 pulling a trailer loaded with a residential mower. Suddenly the trailer began to weave causing Peters to lose control and rollover. A blown trailer tire may have been the cause.

Tyler Peters and his 20-year-old passenger, Kenneth A. Smothers of Terre Haute, IN. were both transported to Terre Haute Regional Hospital by Putnam County Operation Life paramedics, Peters complained of arm pain and contusions. Smothers complained of a leg injury. Both were cited for failure to wear seatbelts.

I play on the radio from 7 am -1 pm weekdays on 98.9 FM WYRZ and WYRZ.org. Follow me on twitter @WYRZBrianScott or e-mail me at brian@wyrz.org.
Previous ISP Bloomington Troopers Arrest Monroe County Woman for Dealing Methamphetamine
Next Marcus S. Montooth Presented With Forensic Scientist of the Year Award