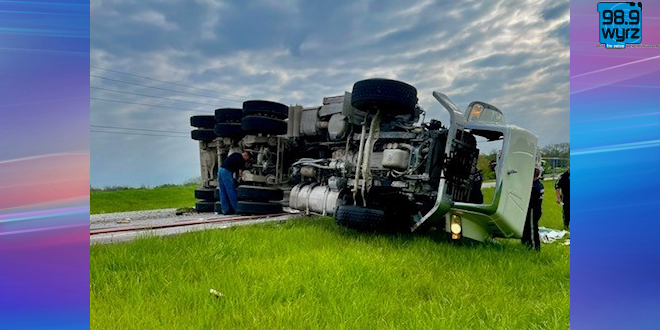 Putnam County Accident Sends One to the Hospital Via Air Ambulance

Putnam County – May 10, 2022, at approximately 8:30 a.m., troopers from the Indiana State Police Putnamville Post and the Putnam County Sheriff’s Department responded to a single vehicle crash on US 40 near County Road 475 East.

The preliminary crash investigation by Trooper Colton Maynor revealed that Larry S. Brown, age 64, of Crawfordsville, Indiana, was driving a 2017 Mack (tri-axle) on US 40 eastbound and was near County Road 475 East.  For an unknown reason Brown lost control of his vehicle and traveled to the south side of US 40, running off of the roadway.  Brown overcorrected the vehicle back to the north side and traveled into the median.  The overcorrection caused the vehicle to roll over, coming to a stop on the driver’s side.  The Greencastle Fire Department assisted at the scene by extracting Brown from the vehicle.

Brown was transported to a hospital in Indianapolis via Stat Flight, for serious injuries.

I play on the radio from 7 am -1 pm weekdays on 98.9 FM WYRZ and WYRZ.org. Follow me on twitter @WYRZBrianScott or e-mail me at brian@wyrz.org.
Previous Hendricks County legislators: New law will help fix nursing shortage
Next Avon Murphy Aquatic Park and Plainfield Main Street Vineyard Church Among Recipients for IDDC Public Art Grants