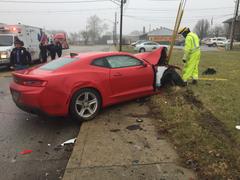 Indianapolis, IN – Earlier this afternoon the Johnson County Sheriff’s Department located a vehicle matching the description of a bank robbery suspect on I-65 in southern Johnson County. Upon attempting to stop the vehicle the driver fled on I-65 northbound at a high rate of speed. Information received by officers indicated this vehicle, a red Chevrolet Camaro, was possibly involved in an earlier armed robbery in Edinburgh Indiana.

The Indiana State Police joined the Johnson County Sheriff’s Department in the pursuit as it neared Greenwood on I-65. The pursuit continued into Marion County and eventually exited at Raymond Street. Once on the city streets, Trooper Thomas Bennett became the lead officer. After winding through city streets, the suspect vehicle became air born after crossing railroad tracks and crashed into another vehicle in the 200 block of E. Shelby Street. The driver of the other vehicle was treated by medics at the scene and released.

The Bartholomew County Sheriff’s Department is actively investigating the bank robbery in Edinburgh, any questions about the suspect, or the robbery shall be directed to them.