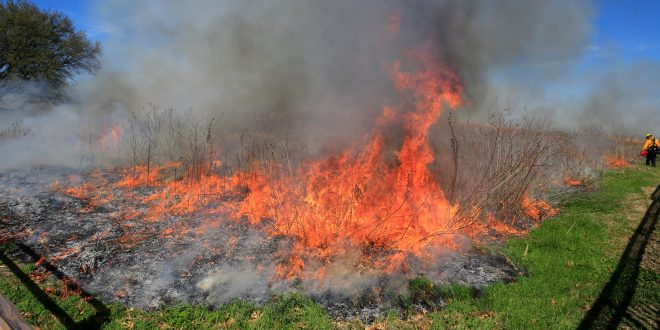 This spring, Brownsburg Parks’ Natural Resources team will conduct a prescribed burn at the Outdoor Classroom at Williams Park. The burn will be in partnership with the Brownsburg Fire Territory and conducted as weather and site conditions allow.

While setting vegetation on fire may seem counter-intuitive to preserving natural areas, the purpose of the prescribed burn is to help maintain and improve native prairie and woodland areas by adding nutrients back into the soil and stimulating native plant growth.

Fire can also increase wildflower diversity, which benefits butterflies, moths, and other pollinators, providing a variety of food sources throughout the growing season.

“Prescribed fire is an important and cost-effective tool for restoring and maintaining our natural resources within the Brownsburg Parks system,” said Natural Resources Manager Greg Dickenson.

Smoke from prescribed fire operations is regular and may continue for several days depending on the environmental conditions. Prescribed fire smoke is generally less intense and does not last as long as smoke produced by wildfires.

The target window for burning is the when the daily average temperature is above freezing, but the soil temp is below 60 degrees. It is also important to ensure the fuel is dry enough to burn, but there is enough water moisture in the ground to help protect the roots of the native plants. Because of the chaotic nature of weather during the spring, there is a possibility that we do not get the proper window of opportunity and the burn is unable to happen this spring.

Prior to the fire operations, nearby streets and trails may be posted with signs indicating areas affected by the prescribed fire. Prescribed burn times may also be announced on Brownsburg Parks’ Facebook Page, @brownsburgparks. Nearby homes will receive letter notifications.

I play on the radio from 7 am -1 pm weekdays on 98.9 FM WYRZ and WYRZ.org. Follow me on twitter @WYRZBrianScott or e-mail me at brian@wyrz.org.
Previous Hendricks C.R. 1000 South closing March 30 for two Weeks
Next Thompson recognizes Danville students at the Statehouse for being named Indianapolis NBA Rising Star All-Stars