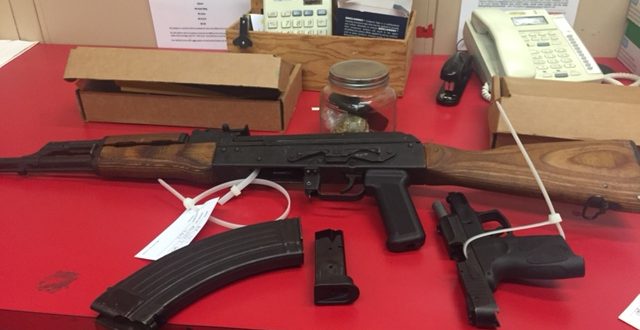 INDIANAPOLIS – Just after 1:30 a.m. on Sunday, June 26, 2016, in the 300 block of South Meridian Street, an officer with the Indianapolis Metropolitan Police Department (IMPD) observed a Chevrolet Impala with vehicular equipment violations. The officer initiated a traffic stop, and as he approached the vehicle, he observed the driver, later identified as 23-year-old Dominick Smith, attempting to conceal a handgun. An assisting officer who later arrived at the scene observed a rifle lying on the backseat of the vehicle. Both weapons (AK-47 and 9 mm handgun) were later discovered to be fully loaded.  As officers were conducting the traffic stop, they could also smell burnt marijuana emanating from inside the vehicle.

Officers took the driver into custody without incident. A search of the vehicle yielded a mason jar containing suspected marijuana. Officers also located a digital scale commonly used in the distribution and selling of illegal narcotics. The suspected marijuana, paraphernalia, and guns were taken into police custody and transported to the IMPD Property Room. The suspect was arrested and preliminarily charged with possession of and dealing in marijuana and was transported to the Arrestee Processing Center.

Arrests of this type highlight the District Commander’s enhanced ability to assign officers to these zones for targeted patrols.  Established beat oriented policing was an initiative instituted by Mayor Hogsett and Chief Riggs with the goal of strategically addressing crime in Indianapolis.  The establishment of four Entertainment Zones and fifteen neighborhood beats was introduced to better manage resources and decrease areas of responsibilities.   Targeted patrols, along with other strategies/initiatives of zones and beats, will continue for the foreseeable future with an emphasis on reducing crime, reducing the fear of crime and enhancing public safety.

I play on the radio from 7 am -1 pm weekdays on 98.9 FM WYRZ and WYRZ.org. Follow me on twitter @WYRZBrianScott or e-mail me at brian@wyrz.org.
Previous Coats Statement on Supreme Court’s Decision in Whole Woman’s Health v. Hellerstedt
Next Homicide detectives investigate after a man is found unresponsive in his apartment