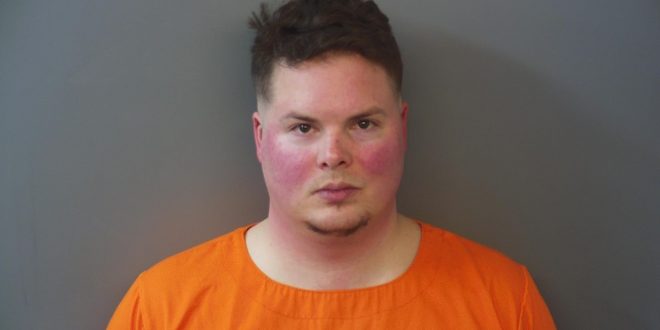 PLAINFIELD, IN- Multiple Plainfield Police Department Officers were called to resolve a situation that activated the Emergency Response Team during the evening of Friday, February 7, 2020. Once on the scene, a Plainfield Police Officer observed another officer showing signs of possible alcohol impairment. The officer in question was off duty when the call for assistance was initiated. Once it became apparent he was under the influence of alcohol, he was immediately removed from the scene and command staff was notified. The command staff immediately requested the Indiana State Police to take over the investigation.

The state police investigation led to probable cause for an arrest and a subsequent certified chemical breath test was administered. Patrick Tucker, a two year officer with Plainfield Police since 2017 was placed under arrest for Operating a Vehicle While Intoxicated and was remanded to the Hendricks County Jail. Tucker has been placed on unpaid administrative leave pending the recommendation for termination to the Plainfield Police Commissioner Board.

“The actions of this officer are unacceptable. The Plainfield Police Department refuses to compromise the quality of service we provide to the community and will continue to hold our officers accountable and to a higher standard.” – Chief Jared McKee

The charges mentioned are merely accusations; formal charges will be determined by the Hendricks County Prosecutor’s Office upon review of the case.

I play on the radio from 7 am -1 pm weekdays on 98.9 FM WYRZ and WYRZ.org. Follow me on twitter @WYRZBrianScott or e-mail me at brian@wyrz.org.
Previous Brownsburg High School Celebrates Student Athletes on Winter Signing Day
Next Hendricks County Community Foundation Announces 2020 Lilly Endowment Community Scholars