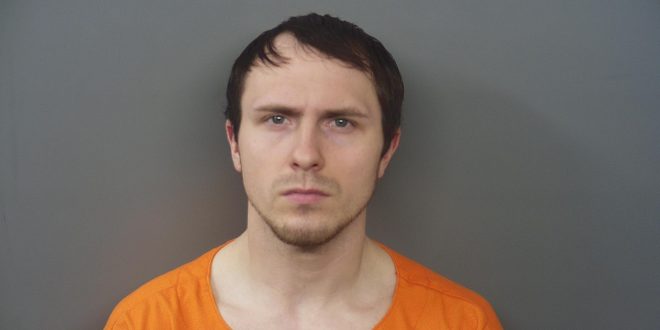 PLAINFIELD – At approximately 1:04 P.M. on January 30, 2021, the Plainfield Police Department
was dispatched to a robbery at Two Chicks Whisky Business bakery located at 120 E. Main Street.

Upon officer’s arrival they were advised by employees a male wearing a ski mask, white shirt and gray pants entered the store, locked the door behind him and was grabbing at his hip like he had a firearm. The fast action of employees and owners throwing food and objects at the suspect, prompted the suspect to leave the business and flee Westbound to the area of 104 E Main St. where witnesses observed the male enter a building.

After Officers arrived at the scene, officers located Matthew Marshall, 25 YOA of Plainfield, exiting the building after changing his appearance. Officers also received a photo from a witness of the suspect fleeing the scene. The photo received had very distinct footwear which matched what Marshal was wearing when officers had contact with him after changing his appearance.

Through further investigation, it was determined that Marshall was solely responsible for the robbery of the business. It is believed that the loss was minimal to the business from a tip jar.

*Under the law, criminal charges are merely accusations and the defendant is presumed innocent unless and until proven guilty.

I play on the radio from 7 am -1 pm weekdays on 98.9 FM WYRZ and WYRZ.org. Follow me on twitter @WYRZBrianScott or e-mail me at brian@wyrz.org.
Previous Indiana’s Individual Income Tax Season Opens Feb. 12
Next Tax Deductions Help Hoosier Veterans