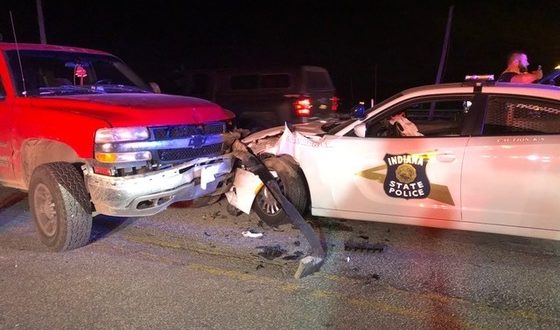 Pickup Collides with Trooper at Intersection in Putnam County

Putnam County—At approximately 9:17 last night, Indiana State Police Trooper Ian Portteus was on routine patrol and stopped in the northbound left turn lane of US 231 at US 40. Suddenly, an eastbound US 40 red 2002 Chevrolet pickup pulling a dump trailer, driven by 44-year-old Craig Hodge of Indianapolis, IN., attempted to turn right and proceed south on US 23. In doing so, Hodge traveled left of center striking the ISP 2017 Dodge Charger nearly head-on. Hodge reported a possible brake issue that may have led to the crash.

None of the drivers or passenger in the Hodge vehicle were transported for injuries. However, some may seek their own medical evaluation for minor complaints of pain. Trooper Portteus’s K-9 partner “Czar” was uninjured.

Craig Hodge was cited for Driving While Suspended and Driving Left of Center.

I play on the radio from 7 am -1 pm weekdays on 98.9 FM WYRZ and WYRZ.org. Follow me on twitter @WYRZBrianScott or e-mail me at brian@wyrz.org.
Previous Man killed in Morgan County on off road vehicle rollover
Next Secretary Lawson reminds Hoosiers to vote on May 8th