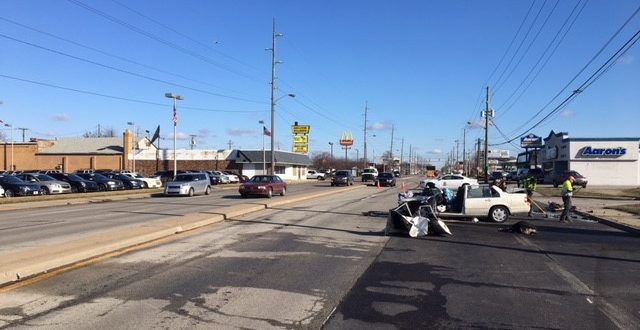 One dead after fatal accident on Indianapolis’ north side

INDIANAPOLIS – Indianapolis Metropolitan Police Department (IMPD) Accident investigators were called out for a serious accident that claimed the life of a woman (19).

Just before 7 a.m. on 03/22/2018, officers were in the area and heard a large crash. Officers then observed that a white Volvo had struck an IPL pole in the 5200 block of N Keystone Ave. There were three occupants inside the vehicle, who were immediately rushed to Methodist hospital by EMS personnel. Despite the best life-saving efforts by medical staff, the 19-year-old woman, who was the front seat passenger, died of her injuries. The driver (28) and other passenger (22) in the Volvo did not suffer life-threatening injuries.

After the news aired about the accident the owner and driver of the blue vehicle contacted the authorities. Both parties are cooperating with the investigation.

This is an ongoing investigation. Anyone with information about this incident is asked to call Crime Stoppers of Central Indiana at 317.262.8477 or (TIPS).  Citizens can also download the mobile P3tips app for Apple or Android phones to submit a mobile tip, or go to www.CrimeTips.org to submit a web tip. You will remain anonymous and may be eligible for a cash reward of up to $1000 if the information leads to a felony arrest.  Only tips submitted directly and anonymously to Crime Stoppers are eligible for these cash rewards. Information given via Crime Stoppers should be considered anonymous.

I play on the radio from 7 am -1 pm weekdays on 98.9 FM WYRZ and WYRZ.org. Follow me on twitter @WYRZBrianScott or e-mail me at brian@wyrz.org.
Previous Banks Supports Bill to Rebuild Military, Fund Federal Government
Next Trash Bash! Ushers in Spring Clean-up