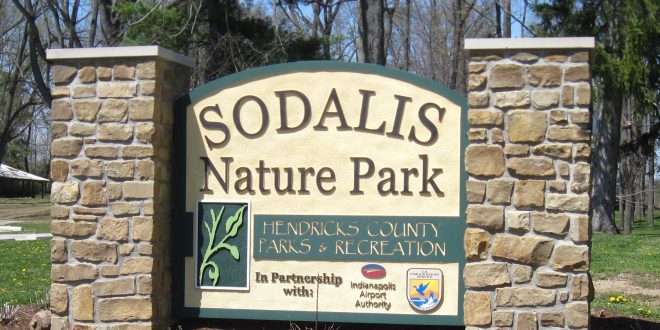 Multiple Agencies Work Together During Prospect of Park Ownership Change

A pending change in ownership of property that includes Sodalis Nature Park in Plainfield is presenting a unique opportunity for collaboration between multiple agencies.

The Town of Plainfield is in the process of purchasing nearly 1,800 acres of land from the Indianapolis Airport Authority (IAA) in the southeast corner of Hendricks County that includes Sodalis Nature Park. Hendricks County Parks & Recreation (HCPR) currently operates the 210-acre park that doubles as a permanently protected habitat for the federally endangered Indiana bat (Myotis sodalis) as part of a 20-year lease agreement between the IAA and HCPR that was signed in 2009.

Because of the protected habitat, the U.S. Fish and Wildlife Service (USFWS) stringently regulates the use of the land making up and surrounding the nature park. The IAA, HCPR, and USFWS all worked closely together to establish the park, which opened in May of 2011, in a manner that would be compatible with the conservation efforts there.

Now, with the Town of Plainfield moving toward purchasing the land from the IAA, several agencies must again work together to maintain, or even expand, Sodalis Nature Park while simultaneously protecting the bat habitat and fostering the continued growth and development of Plainfield and Hendricks County.

On November 1, Plainfield Town Manager Andrew Klinger spoke to the Hendricks County Park Board and HCPR superintendent Jeremy Weber, outlining the town’s general plan for the property after acquiring it. Plainfield Parks & Recreation does not currently have the staff or equipment to properly manage a natural area such as Sodalis Nature Park, Klinger told HCPR, so the Town of Plainfield is interested in having HCPR continue to manage the property.

The challenge, then, is for town officials, parks officials, county officials, and USFWS officials to all work together toward an agreement that protects the interests of all parties, protects the endangered bats, and enhances the economic growth of Plainfield and the entire county.

Discussions between all parties about how to establish and execute such an agreement have already begun, and plenty of additional discussions are on the horizon.

In the meantime, the inter-agency collaboration and cooperation on this project illustrates the importance of parks and wildlife to our society, as well as the need to work together for the betterment of our communities.

As Klinger told HCPR, an arrangement that is beneficial to all involved parties could be award-winning, offer more recreational opportunity for citizens, become a regional tourism attraction, and help drive significant economic development in the area.

I play on the radio from 7 am -1 pm weekdays on 98.9 FM WYRZ and WYRZ.org. Follow me on twitter @WYRZBrianScott or e-mail me at brian@wyrz.org.
Previous Governor Holcomb Directs Flags To Be Flown at Half-Staff In Wake Of Texas Church Shooting
Next Extra deer??? Share it here!!