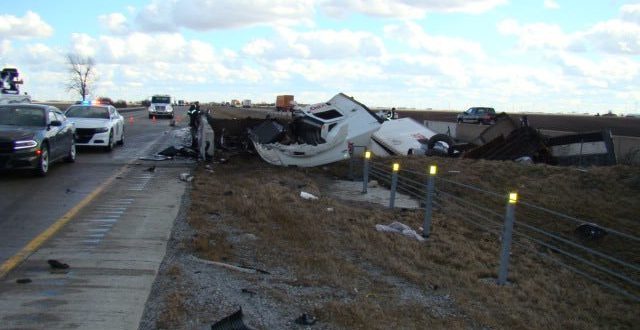 Multi-Vehicle Crash Shuts Down I-65 Near Remington

REMINGTON- This afternoon at 2:00 p.m. (CDT), a multi-vehicle crash occurred on I-65 in the northbound lanes at mile-marker 198. Preliminary investigation by Trooper Kurtis Jones shows that several semis were traveling northbound when a strong gust of wind blew across the interstate from the west, resulting in a trailer becoming airborne and striking the truck that was in the right lane.  Both drivers then lost control of their vehicles with one striking the median guardrail before impacting the concrete bridge abutment.  The cab of the truck then separated from the frame.  The truck continued down into the creek while the cab came to rest on its side in the median.  The second truck crashed into the east ditch.  Both drivers were transported from the scene with non-life-threatening injuries.

A secondary crash occurred at the 197 mile-marker almost immediately after.  That crash also involved two semis and a box truck.  In the second crash, a semi was slowing for the earlier crash.  Preliminary investigation by Trooper Corey Brown revealed that a box truck was rear-ended by a tanker semi, which pushed that box truck into the rear of a second semi.  The box truck then crashed into the right ditch while the tanker jack-knifed and crashed into the median before also coming to a rest in the right ditch.  The driver had to be extricated from the cab and transported from the scene with non-life threatening injuries.

I play on the radio from 7 am -1 pm weekdays on 98.9 FM WYRZ and WYRZ.org. Follow me on twitter @WYRZBrianScott or e-mail me at brian@wyrz.org.
Previous **CANCELLED** – A Silver Alert has been declared for missing Camby teen
Next Gov. Holcomb names Plainfield Fire Chief Joel Thacker as Fire Marshal