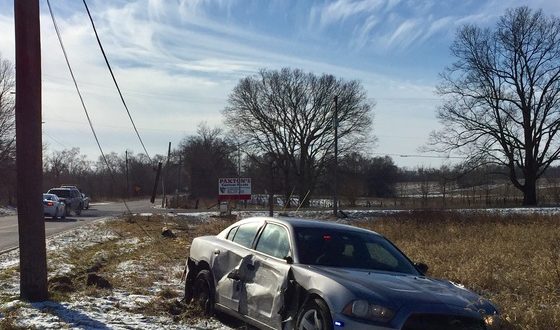 Motorist Collides with Trooper near Intersection in Vermillion County

Near the 4th Street intersection, a northbound gray 2006 Cadillac Escalade moved to the right and Senior Trooper Murphy attempted to pass on the left. As the ISP vehicle was passing, the Escalade turned left into the side of the police charger, forcing the ISP charger off the west side of the roadway and into a utility pole.

Senior Trooper Chuck Murphy, age 44 of Clinton, was taken to Union Hospital of Clinton for treatment of neck and back pain.

Kathleen B. Holvey, age 63, of Myrtle Beach, South Carolina, driver of Escalade, was transported to Union Hospital of Clinton for treatment of pain.

No citations issued at this time.

I play on the radio from 7 am -1 pm weekdays on 98.9 FM WYRZ and WYRZ.org. Follow me on twitter @WYRZBrianScott or e-mail me at brian@wyrz.org.
Previous Extreme cold weather prompts an immediate response from various agencies across the City
Next Gov. Holcomb Announces Judicial Appointment for Huntington County Circuit Court Vacancy