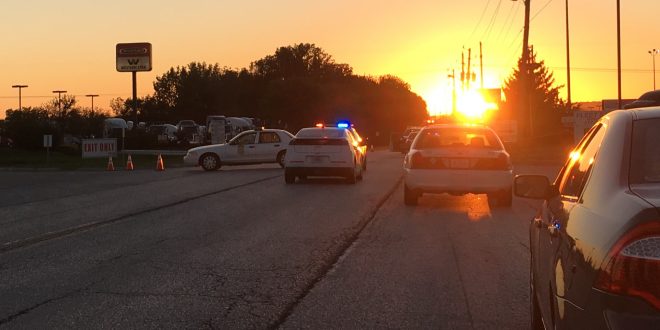 Motorcyclist killed in traffic accident on Indianapolis’ south side

INDIANAPOLIS – Indianapolis Metropolitan Police Department (IMPD) Accident investigators were called to the scene of a fatal accident that claimed the life of a man riding a motorcycle.

Just after 5:30 p.m. on 09/19/2016, officers with the IMPD were dispatched to the 1700 block of W Thompson Rd on reports of an accident involving a semi and a motorcycle. Responding officers arrived to find a unresponsive 22-year-old male in the parking lot of the  closed Flying J gas station. EMS personnel arrived and pronounced the victim dead on-scene.

Accident investigators arrived and began gathering information from witnesses. Investigators believe that the semi was headed West on Thompson Rd in the left lane and the motorcyclist was headed the same direction in the right lane. The two lanes merge into one Westbound lane as it approaches the area of the Flying J parking lot. The semi made a right turn in front of the motorcyclist, at which time the victim was unable to stop and ran into the semi trailer, killing him.

The victim’s name will be released once proper next-of-kin notification has been made. Anyone with information regarding this incident or others is urged to contact Crime Stoppers of Central Indiana at (317)262-TIPS(8477).

I play on the radio from 7 am -1 pm weekdays on 98.9 FM WYRZ and WYRZ.org. Follow me on twitter @WYRZBrianScott or e-mail me at brian@wyrz.org.
Previous Man arrested after standoff with police in Brown County State Park
Next Beasley’s Corn Maze – The Great Pumpkin – Opens For the Season!