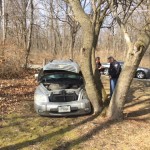 Preliminary investigation revealed a silver 2008 Chevrolet HHR was eastbound on Devonald Avenue and left the roadway on the south side, traveled approximately thirty feet, and struck a tree. It appears the driver, 23-year-old Gregory Ray Lough of Terre Haute, IN., may have suffered a medical episode and lost control. Lough was transported to Terre Haute Union Hospital for general treatment and observation. Any injuries are believed to be minor.

I play on the radio from 7 am -1 pm weekdays on 98.9 FM WYRZ and WYRZ.org. Follow me on twitter @WYRZBrianScott or e-mail me at brian@wyrz.org.
Previous Salin Bank in Flora Robbed Again
Next Routine Commercial Vehicle Inspection Nets Fraudulent Credit Cards