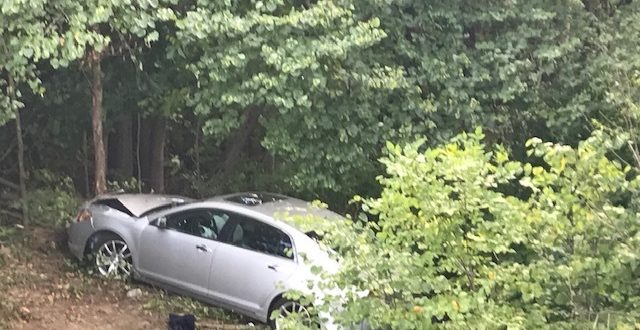 Preliminary investigation by Master Trooper Adam Edwards, indicates that a 2005 Chevrolet, driven by Daryl W. Duhrkoff, of Portage, Michigan, was traveling westbound on Interstate 70 near the 18 mile marker.  A passenger in the vehicle, Shirley R. Lively, of Portage, Michigan, advised that she spoke to Duhrkoff and received no response.  Lively stated that when she looked at Duhrkoff, she observed that he was not acting normal and had a blank stare.  It was at that time that the vehicle began to drift to the south, traveling through the grassy median, and across both eastbound lanes of Interstate 70.  The Chevrolet came to an abrupt stop upon entering the wood line on the southside of Interstate 70.  First responders, and good Samaritans at the scene, immediately rendered first-aid to Duhrkoff, who was not breathing, however they were unable to revive him.  Duhrkoff was pronounced deceased at the scene of the accident by the Clay County Corner.  Lively was transported to a local hospital with non-life threatening injuries.

Drugs and alcohol are not believed to a contributing factor of the accident.

Family members have been notified.

An autopsy is scheduled for tomorrow morning at Regional Hospital.

I play on the radio from 7 am -1 pm weekdays on 98.9 FM WYRZ and WYRZ.org. Follow me on twitter @WYRZBrianScott or e-mail me at brian@wyrz.org.
Previous Agriculture photo contest winners honored at state fair
Next Weekend Work: Construction around Marion County