INDIANAPOLIS (June 17, 2016) – Nearly 13,000 more Hoosiers found employment in May 2016 than the previous month while the number of unemployed dropped by more than 5,000.  This positive ratio enabled Indiana’s labor force, a measure of Hoosiers employed or seeking employment, to continue its positive momentum and bring total labor force growth to more than 186,000 since January 2013.

The corresponding effect of growth in employment along with a decline in unemployment lowered Indiana’s seasonally adjusted unemployment rate to 5.0 percent. The unemployment rate, a U.S. Bureau of Labor Statistics (BLS) indicator that reflects the number of unemployed people as a percentage of the labor force, declined by 0.2 percent over the previous month. Additionally, the state’s labor force participation rate increased 0.1 percent in May while the nation’s rate decreased 0.2 percent for the second consecutive month. Indiana’s participation rate now stands at nearly three percent above the national average (65.4 percent vs. 62.6 percent).

“Indiana’s labor force participation rate is at the highest point since 2009 and continues to outpace the national average,” said Steven J. Braun, Commissioner of the Indiana Department of Workforce Development. “Indiana experienced positive gains in employment accompanied by a decrease in unemployment, which suggests that many Hoosier jobseekers, including those joining the workforce for the first time in May, found success in securing gainful employment.”

Commissioner Braun also noted that Indiana’s private sector employment growth since July 2009, the low point of employment, has surpassed the nation (13.7 percent vs. 12.6 percent). Additionally, he referenced that initial unemployment insurance claims for the first 23 weeks of 2016 are at their lowest point since 1987. 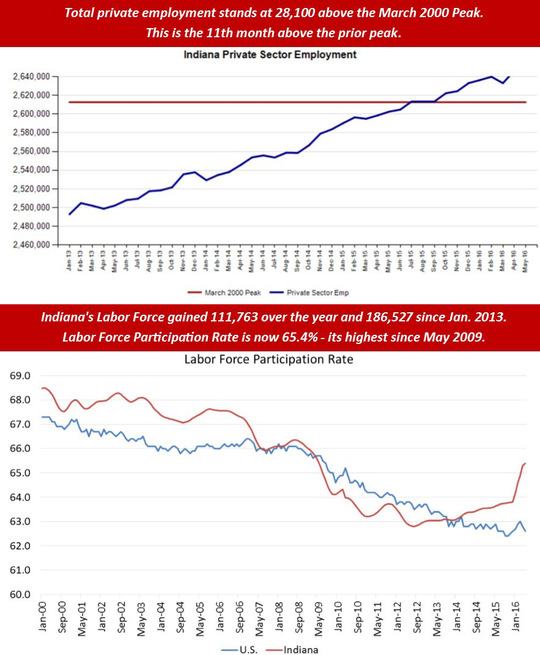 The highest levels of growth occurred in the Trade, Transportation and Utilities (3,700) and Financial Activities (300) sectors. Gains were offset with losses in Professional & Business Services (-3,400), Leisure and Hospitality (-2,100) Manufacturing (-2,100), and Private Education & Health Services (-1,100) sectors. Over the past three years, Indiana’s private sector has grown by more than 147,000 jobs.

I play on the radio from 7 am -1 pm weekdays on 98.9 FM WYRZ and WYRZ.org. Follow me on twitter @WYRZBrianScott or e-mail me at brian@wyrz.org.
Previous Indiana Supreme Court names Chief Administrative Officer
Next Governor Pence Heralds Continued Strong Indiana Employment Rate