INDIANAPOLIS (April 15, 2016) – More than 18,000 Hoosiers joined the labor force in March, marking a third consecutive month of unprecedented growth. Over the past year, Indiana’s labor force has grown by over 88,000 and by over 157,000 since January 2013. Correspondingly, the state’s labor force participation rate increased 0.3 percent in March and continues to outpace the national average by nearly two percent (64.9 percent vs. 63.0 percent).

Indiana’s seasonally adjusted unemployment rate, a U.S. Bureau of Labor Statistics (BLS) indicator that reflects the number of unemployed people as a percentage of the labor force, rose by 0.3 percent over the previous month to 5.0 percent in March, matching the national average. Despite the uptick in unemployment, there were 9,300 more Hoosiers employed in March than in February.

“Over 60,000 Hoosiers joined the workforce in the first three months of 2016, which is indicative of worker confidence in finding and securing gainful employment in Indiana,” said Steven J. Braun, Commissioner of the Indiana Department of Workforce Development. “While this influx of workers has an effect on the unemployment rate, the fact that 9,300 more Hoosiers are employed than last month, and over 87,000 more are employed than this time last year, is a testament to Indiana’s strong and growing economy.”

Commissioner Braun also noted that initial unemployment insurance claims are at the state’s lowest level in more than two decades. 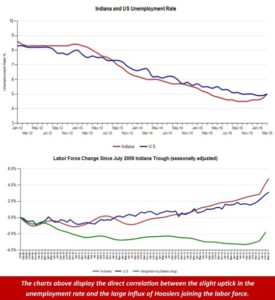 Employment by Sector
The highest levels of growth occurred in the Private Education & Health Services (+2,500) sector. Gains were offset by contraction in the Trade, Transportation and Utilities (-4,100) and Construction (-2,300) sectors. Over the past three years, Indiana’s private sector has grown by nearly 140,000 jobs.

I play on the radio from 7 am -1 pm weekdays on 98.9 FM WYRZ and WYRZ.org. Follow me on twitter @WYRZBrianScott or e-mail me at brian@wyrz.org.
Previous Donnelly Statement on Chinese Agreement to End Steel Subsidies
Next Hendricks County Community Foundation Grants to Tri-West Middle School